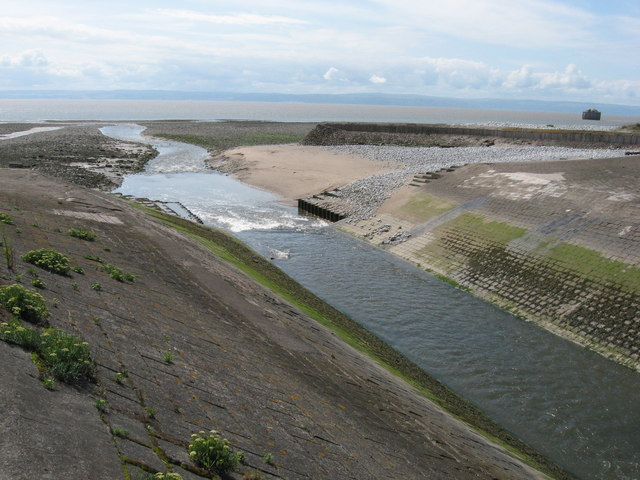 The following is extracted largely from the Wikipedia entry for Aberthaw:

In the 16th century, the port, situated to the south east of the village proper, had emerged as a small but thriving harbour. The ships took wool and foodstuffs from Wales and returned with wine, salt, dried fruit and leather from the towns of northern France. Aberthaw's importance was furthered by the loss of Porthkerry harbour to a 1584 storm, rendering Aberthaw the principal calling-point within South Wales between Cardiff and Swansea.

By the first half of the 17th century, boats were departing not only for England and France, but also Spain and Ireland. A similarly flourishing trade with the West Indies, chiefly in sugar and tobacco, did not, however, survive the disruption caused by the outbreak of the English Civil War. Within the context of the village, the port played a significant role in the livelihoods of many residents in the 17th century, though not always in a legal manner: Smuggling was rife within the Bristol Channel. Buildings such as the fortified Marsh House, built just to the west of the village in 1636, appear to have been used for storage of illegally imported goods, especially tobacco. During the reign of George II, the Master of Fonmon sent soldiers to Aberthaw to try and capture the ringleaders of the smuggling gang Beyond the business of the harbour, agriculture was also of central importance to the settlement, the land to the east of the village, between East Aberthaw and Fonmon, being marked by windmills and orchards. To the west, the marsh lands were suitable for grazing.

Aberthaw's maritime trade continued throughout the 18th century, but by the 1840s, its role as a port had declined: the harbour is resorted to by a few coasting-vessels of inferior burthen, as the Topographical Dictionary of Wales in 1849 reported. In 1851, Aberthaw had a population of 495 people. The principle material then being exported, however, was the local lias limestone, called Aberthaw tarras, which was used to make hydraulic lime, which sets under water and was therefore very useful for building light houses (including the Eddystone Lighthouse) and canal locks.

The most important 'port' along the whole coastline between Neath and Cardiff in the seventeenth and eighteenth centuries was Aberthaw (Aberddawen or Aberddaw) which has long since passed into desuetude. Here indeed was an ancient anchorage with a long maritime history, most of which is as yet unwritten. In 1650 there was at this port 'a concourse of shipping' and it is on record that 'the trading and re-trading of goods' which was carried on here brought 'great yearly benefit' to the National Customs.

The boats which traded from Aberthaw at this time were generally small, of from twenty to thirty tons burthen, and (what should be emphasised) carried passengers as well as goods to Bristol and Minehead. One vessel, the Great Thomas, of Aberthaw, was over one hundred tons burthen, and with others used 'to traffique into Ireland, France and Spain'. The water in the port, however, was too shallow for these large vessels to anchor and therefore upon their return from foreign tradings, had to 'touch at the port of Mynehead and there unloade parte of their burdens and with the rest arrive at Aberthaw where there was great occasion and use for barques and other vessels to fetch home such goods as are often left at Mynehead'.

It is recorded, too, that during the time of Charles I (1625-1649) there were two large vessels employed by two merchants of Aberthaw - 'Spencer of March house, and Merchant Nichols, one of the Nichols of Ham'- on the West India trade. At that time cargoes were brought up from these 'by lighters to the Booth Cellars or Warehouses and to March House' and it was a very common thing to take £100 of a morning for sugar and other West Indian produce'.

In former times many of the inhabitants of the port and neighbourhood of Aberthaw combined seafaring with an agricultural life, and over the years had earned for themselves the reputation of being good seamen 'fit for H.M. service'. In the early seventeenth century over twenty families are said to have 'procured the greatest part of their sustenance and maintenance by means of the open and free trade of the harbour of Aberthaw'.

Some degree of shipbuilding, too, was carried on near Aberthaw - at the Booth and March House - where timber was cheap and plentiful. The building of the ships was mainly in the hands of the local merchants, the most notable of whom were the Hollands, Cottons, Powels and Walters of West Aberthaw, and the Batsleys and the Spencers, one of whom, Thomas Spencer, was reputed to have been a tobacco planter at St. Kitts.

Aberthaw may truly be called the 'port of the Vale' and its former activities, when studied in relation to the better known port of Cardiff, certainly justify that appellation. It has been shown elsewhere how the natural features of the Vale of Glamorgan, which favoured early cultural associations, were in Roman and Norman times exploited for political and economic domination. Of these natural features, the proximity of the coastal regions of the Vale to the coast of Somerset was by no means the least important. The fact which Leland observed that 'from Minehead to Aber Thawen in Glamorgan, the nearest traject there into Wales, at 18 miles' is not without significance, for the trading link between Aberthaw and Minehead had been strongly forged over many years.