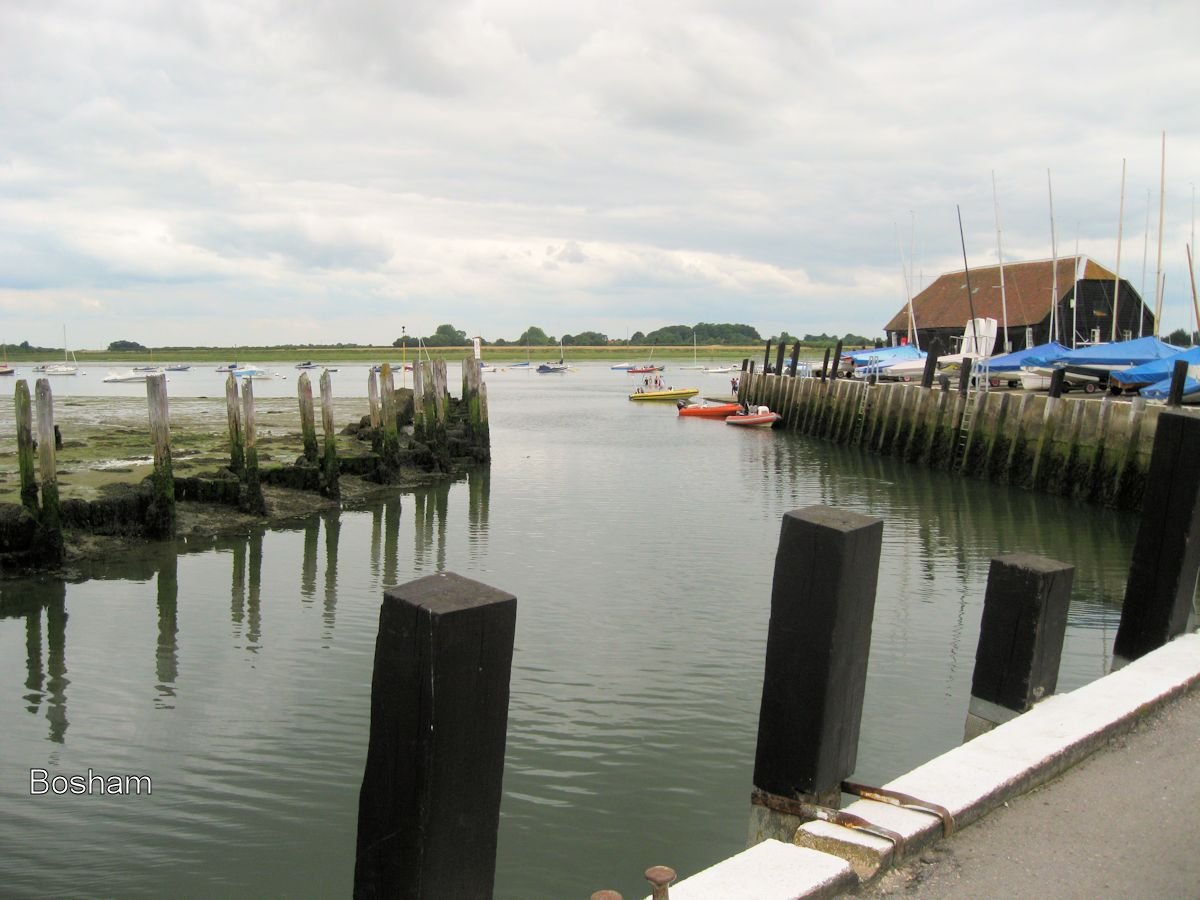 Chichester Harbour was formed from a series of drowned river valleys created during the last ice age. Palaeolithic man had already reached what is now Britain and although there is evidence of Stone Age civilisation and of Bronze and Iron Age settlements in the area, the Romans were the first to use the harbour for serious transportation and commerce. With the collapse of the Roman Empire, the historical trail goes cold until the late Saxon period when Bosham was regarded as a place of some importance and was held by King William after the Norman Conquest. The main photo above is of Bosham Quay.

By the 13th Century the harbour was highly values as a wool port. In the 18th Century the principle cargoes were corn, which was exported and coal which was imported. But shipping declined gradually thereafter as more efficient land transport was developed. The harbour became commercially obsolete in the early years of this century and although water mills and oyster fishing continued to give it a commercial purpose, it is the development of its recreational potential, particularly in the years since the second world war, which dominates the harbour today.

The post war growth in population, prosperity and leisure time hastened the evolution of the harbour as one of the most important recreational centres for water sport on the South Coast of England. The number of boats grew rapidly, moorings and marina berths multiplied and the pressure of people and development became more demanding.

The Harbour, while geographically one natural expanse of water, straddles the Hampshire/West Sussex county boundary and is part of one natural system of harbours which include Langstone and Portsmouth. Until the Conservancy was established it was managed as the two separate harbours of Chichester and Emsworth. The City of Chichester Corporation, a body whose local government boundary included only a small part of the Fishbourne Channel, acted as Harbour Authority for the Chichester Harbour and the Havant and Waterloo Urban District Council for Emsworth Harbour. These administrative arrangements stemmed from the days when commercial traffic used the harbour to serve the town of Chichester and when there were substantial timber interests and oyster fisheries based at Emsworth.

Emsworth was an important port and up to the 19th century was famous for its oyster fishing fleet and the boat building which still continues today, but on a lot smaller scale. From 1850 onwards commercial traffic steadily declined partly due to improved inland communications and in part to the increasing size of the craft which small ports could no longer accommodate.

As commerce declined at the latter end of the 19th century, so long-distance fishing took its place, yet by the 1920s this too had ceased. The last collier docked in 1929.

At the start of the 20th century the death of the oyster industry, the reduction in milling, and the growing influence of the railway greatly changed the established way of life. The town is now probably better known for its sailing. See photo under 'More photos'.

Dell Quay is no longer used commercially; it is now a centre for yachting. The last cargo passed through Dell Quay in the 1930s. The Dell Quay Sailing Club is based here. See photo above.