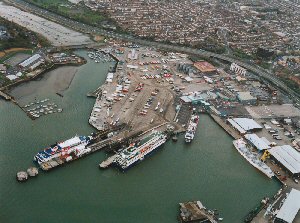 For over 800 years, Portsmouth Harbour has played a key role in the history of Britain and the world. From its humble beginnings as a Saxon fishing village Portsmouth developed into a military garrison town and then into the home of one of the most powerful sea-borne fighting forces in history.

The Historic Dockyard is home to three of the greatest warships ever built: Mary Rose, HMS Victory and HMS Warrior.

The Continental Ferry Port accounts for 80 per cent of Portsmouth Commercial Port's business; however the port is market led and committed to ongoing development - as a multi-user port. An £8 million project to transform Berth 3 has seen the installation of a new double deck linkspan to meet the requirements of the next generation of cruise ferries, fast ferries and high speed craft. At 50% bigger than the largest linkspan already in operation at the Port, the fully self-contained floating structure offers a greater degree of flexibility, with the ability to change its freeboard from minimum to maximum in less than 15 minutes. The top deck moves independently from the lower deck, providing greater headroom between the decks enabling the linkspan to facilitate the wide variety of ships and cargoes travelling through the Port.

The port also has berths at The Camber in Old Portsmouth, primarily used by Wightlink, the Isle of Wight ferry company, the citys fishing fleet and occasional small lay by vessels (see More Photos above).