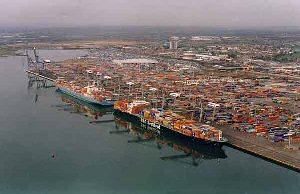 One of the countrys busiest and most successful deep-water ports, Southampton is a natural choice for a wide range of customers and trades, with facilities to handle virtually any type of cargo. Its natural deep-water harbour and unique double tide allow unrestricted access for the worlds largest vessels.

Southampton is the UKs leading vehicle-handling port, and has long been the UKs principal cruise port, handling almost half a million passengers in 2003. It is also a major handler of liquid and dry bulks and containers, and almost half of the UKs containerised trade with the whole of the Far East is handled at this port. Around 23 million tonnes of oil and petroleum-related products are handled at the oil refineries of Esso, at Fawley, and BP, at Hamble, each year.

Privately-owned Southampton Container Terminals is the largest commercial operator in the port. It is jointly owned by P&O Ports and Associated British Ports. Telephone: 023 80 701701.

In addition to its varied commercial activities, the Harbour Area that includes the Central Solent, Southampton Water and the Rivers Test and Itchen is a haven for yachts and leisure craft. ABP strives to preserve the safety of all users including recreational boat owners as they sail the waters of the Solent. The harbour plays host to international events such as the Whitbread and Global Challenge yacht races, Cowes Week and the Southampton International Boat Show. Home to around 2,500 recreational berths Southampton has marinas with visitor facilities at Hythe, Town Quay, Ocean Village, Kemps and Shamrock Quay.