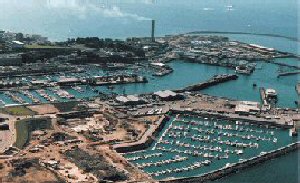 St Helier had no harbour until 1700, when a jetty was built, and Pier Road was constructed to give access to it. The Havre Neuf, as it was known, was just to the south of La Folie, and when rebuilt and strengthened it later became the South Pier. At first, vessels had to unload at low water, when carts could be driven across the sands to take the goods to town. This was little better than using the harbour at St Aubin, and driving goods across the Bay to town. In 1790, work started on the North Quay and in 1814 on the Merchants Quay (now Commercial Buildings). The demands of local shipping increased, the harbour area was growing, but access was still limited by the tides. Even today the harbour still requires regular dredging to maintain access at lower tides.

Work began on the Victoria Pier in 1841, and the Albert Pier in 1846. The Victoria Pier was ready for use for the Queens visit in 1846. Prince Albert asked: Why do you Jerseymen always build your harbours on dry land? Various plans and schemes were proposed and abandoned, including one presented by Sir John Coode, the architect of the Corbière lighthouse.

The Elizabeth Harbour (with its new terminal building) was built to cater for large freight and passenger vessels and was opened by the Queen in 1989.

The port of St Helier is nowadays known as the 'Port of Jersey'.