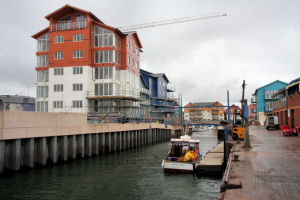 With its foundations in Roman times Exmouth has grown from a fishing village through being an important port in the 1100s to a busy tourist town.

Sir Walter Raleigh sailed on many of his voyages from Exmouth harbour and Lord Nelsons wife lived in the town.

In December 1989 Exmouth Docks Company closed the docks to commercial traffic. It is now a marina but still has provision (in law) for commercial vessels to tie up on the pierhead. Pleasure cruises also operate from the docks, for dolphin watching and fossil-hunting along the coast. The passenger ferry to Starcross on the opposite side of the estuary operates from the pierhead.