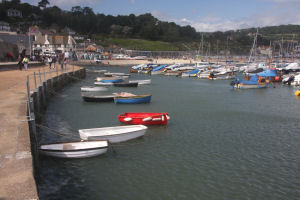 The first written record of Lyme Regis was in 774AD when the West Saxon King Cynewulf gave the land along the river Lym to the monks of Sherborne Abbey, to establish a sea salt manufacturing industry. However man had inhabited this area since the Iron Age.

The town was known by the Romans as "Lym Supra Mare". Lyme takes its name from the river Lym, Lym meaning a torrent of water.

Lyme Regis boasts a turbulent past, its most well known feature being The Cobb, a Grade 1 listed structure. It has been a trading centre since medieval times. In the Tudor era it was one of the most important ports on the south coast, its ships sailing to most parts of the then known world.

There are moorings within the harbour that dry out and are let on an annual basis. There is a large waiting list for moorings.