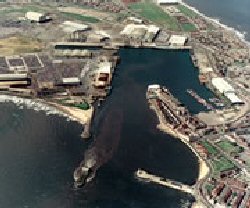 During the Middle Ages Hartlepool was one of the busiest ports on the east coast, but by the 18th century decline had set in and the harbour was in disrepair. In 1808 the harbour was enclosed and drained, and two years later part of the old pier was destroyed by a storm. A court case in 1813 forced the owner to re-open the harbour and allow the sea in again. After that time a toll was charged on ships using the port to maintain the pier.

During the early 19th century Hartlepool was known primarily as a health resort for the well-to-do to come and take the air. All this changed in the 1830s when a railway was built to connect Hartlepool to the collieries of the South Durham Coalfield, and work began on modern docks to handle the anticipated increase in traffic. This led to the port thriving once again exporting coal and importing timber. In 1870 a breakwater was constructed to protect the north harbour and in 1889 a promenade was built along the sea front.

When the owners of the railways and the docks fell out, the railway owners built their own docks south west of the town, being permitted to do so by an Act of Parliament in 1844 which recognised the forming of the 'West Hartlepool Dock Company'. Although not fully completed, they opened for traffic on 1st June 1847. Almost immediately a new town sprang up known as West Hartlepool and by the 1880s it had overtaken the old town in size. Taken together the two towns were extremely important and by 1900 their port was one of the four busiest in the country.

The vast docks complex was also home to the shipbuilding industry, served by marine engine works and a steelworks in the town. Such was its importance that during the First World War the Germans deemed it a suitable target for their first attack on British soil, three warships firing on the town at dawn on December 16th 1914, killing 119 people. It was again singled out by the Germans as an important target in the Second World War, being bombed long before London.

Hartlepool has three mobile bulk loading conveyors, twelve quay cranes and a range of hydraulic grabs to suit a variety of commodities. The Port handles a broad mix of minerals and fertilisers and has dedicated terminals for grain and scrap. A computerised weighbridge facility is adjacent to Irvine's Quay.

Hartlepool has had a long association with the forest products trade and is fully equipped to handle a wide range of products. In addition to 60,000m2 of open storage, there is approximately 29,000m2 of dedicated warehousing available for timber, pulp or paper, incorporating all the benefits of a computerised stock control system.

Steel is now a major traffic for Hartlepool. Particularly significant is the import of steel plate for the manufacture locally of large-diameter pipe, which is also exported via Hartlepool. Much of the steel for export is received direct by rail.

The Port has purpose-built facilities for vehicle handling, including four roll-on/roll-off berths and large areas of adjacent hard standing, complete with lighting and security fencing. Each year thousands of cars and vans are imported from the Continent via Hartlepool.