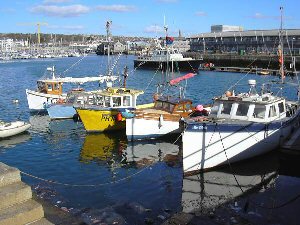 Sutton Harbour lies behind Southside Street in the Barbican. At one time this was just a ragged line of warehouses, but the construction of Vauxhall Quay in 1602 transformed the area. It was a busy thriving harbour in medieval times, but by the mid 20th Century, had fallen into disuse.

Until the 13th century this inlet reached right up to the buildings but was filled in by 1520. After 1775 this infill was used as a parade ground by the Royal Marines who used to billet in houses around the Barbican area before the Stonehouse barracks were built. This accounts for its name "The Parade".

By the mid 19th Century, congestion caused by the emigration ships and the booming fishing industry made it necessary to widen the quay near the Mayflower Steps and a fish market was built on this reclaimed land in 1896. Across the harbour stand quays which were used in the late 18th century for the transhipment of pottery and porcelain. The verandah'd building of the China House, dating from about 1650 is the sole survivor of three storehouses which once stood there. Although it had varied uses, such as a naval storehouse, gun wharf, hospital, prison and many many more, it is now an attractive waterside pub.

Today the harbour is shared by leisure and fishing craft.