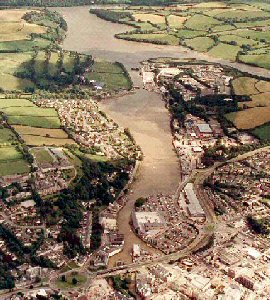 The city came into existence as a tin port, at the lowest point where the rivers could be bridged or forded.

Truro merchants were in the carrying trade by Tudor times, for example carrying woollen cloth from Wales to Brittany and wine from Bordeaux back to Wales, as well as Welsh coal to Devon and Cornwall. It was the development of larger ships in the seventeenth century, rather than the growth of Falmouth, which led to the decline in Truros trade, but the towns importance as a commercial and industrial centre and a tin-exporter was so great that the quays were still well used, even though transhipment to lighters was necessary.

There were objections in 1848 to the building of Boscawen Bridge because vessels of up to 60 tons with fixed masts had until then been able to reach the town quays. (What would they have said to the river being covered at Lemon quay and turned first into a car park and more recently into a piazza?) Trade continued with vessels of up to 500 tons unloading at Malpas into lighters which had either lugsails on short masts or masts which could be unstepped.

Until early Victorian times there was a shipbuilding yard on Lemon Quay producing sloops and schooners for coastal trade.

During the 1939-45 war much use was made of the deep water facilities of the Fal River; They are still used to mothball large merchant ships and tankers.