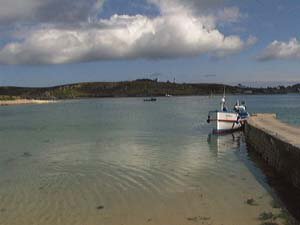 Bryher is a peaceful little island, home to the smallest of all the communities that can be found on the isles of Scilly. It has one of the best vantage points in the whole of the Isles of Scilly - from the top of the appropriately named Watch Hill, where, in the past, islanders kept watch for ships in distress or requiring a pilot to guide them up the South Western Approaches.

Bryher's claim to fame is that the quay was built by Anneka Rice as part of 'Challenge Anneka' on BBC television.