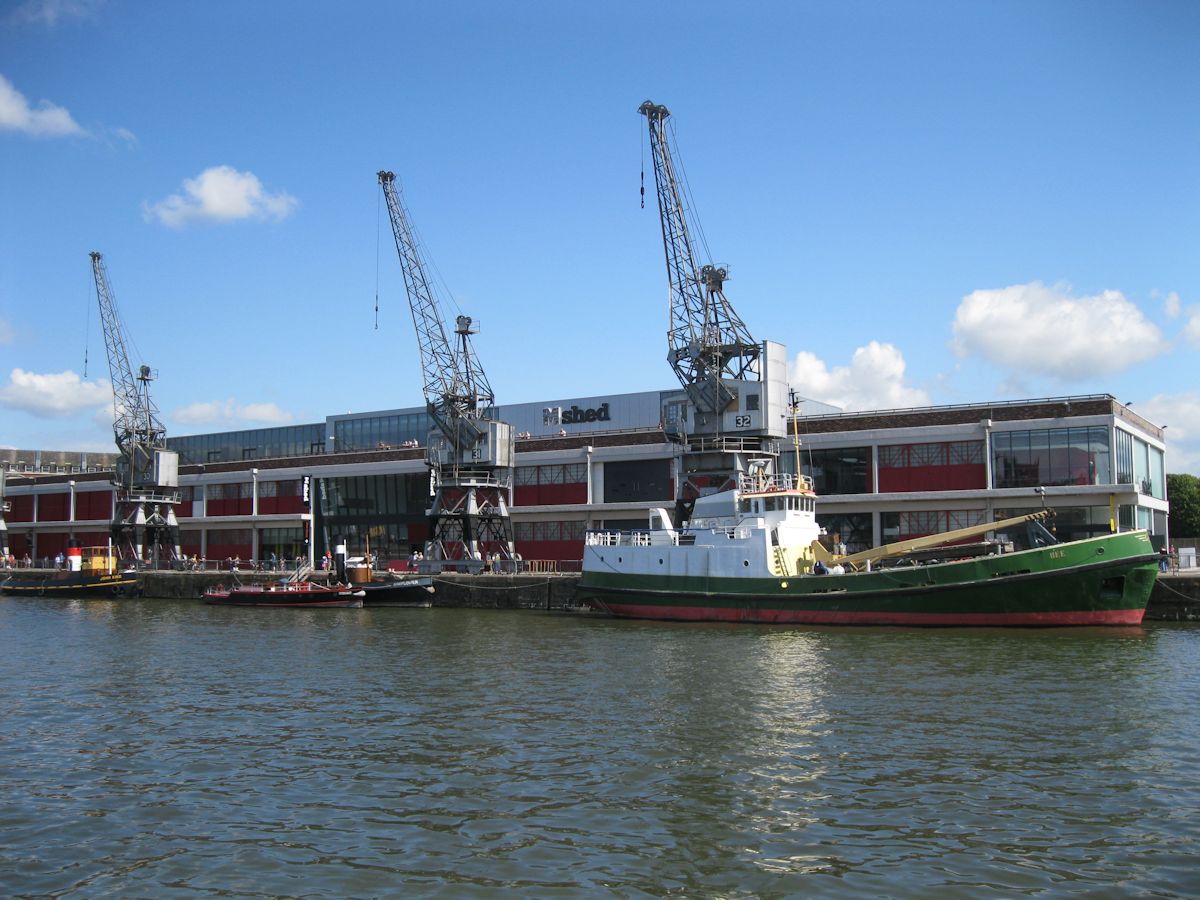 The City Docks provide long and short-term moorings in the heart of Bristol close to all City Centre facilities, and can be accessed either by sea at the western end or by the Kennet and Avon Canal at the eastern end.

As a port Bristol always suffered from a major disadvantage - it is six miles inland.

The approach to the city from the sea was from the Kingroad at Avonmouth and through the tortuous River Avon. In 1662, the City Corporation decreed that because of the number of ships grounding in the Avon that no ship over 60 tons could attempt the passage under penalty of £10. Even up until the 18th century ships were often unloaded by beaching them at low tide and carrying the goods ashore. This put undue stress on the ships and many of the hulls were strained or damaged.

In 1712, a wet dock was built on the site of the old Roman harbour at Sea Mills. Joshua Franklyn, a wealthy Bristolian, provided the money for it and the Sea Mills Dock Company which was founded in 1716. The dock was completed in 1715, and had an area of around 9,000 square yards. This dock had one major disadvantage, the road to Bristol was practically non-existant. From its opening until around 1763 it was used to refit privateers and a whaling company used it between 1750 and 1761, but very little in the way of cargo was ever unloaded here.

The building of Champion's Wet Dock, later known as Merchants Dock, at Hotwells in 1768 meant the end of the Sea Mills dock and nowadays all that's left are the remains of the outer walls.

On the Bristol side of Sea Mills is a very tight bend in the river, this bend, Horshoe Bend, meant that ships over 300 feet long could not get round it. There were plans to straighten it but by then the entrance lock to the Floating Harbour had been built. This was only 350 feet long and so the plans for straightening the river were dropped.

The City began losing trade to Liverpool but the merchants were unwilling to invest in the docks. In 1802, Willaim Jessop put forward a scheme to reverse the fortunes of the port. The plan was to turn the rivers Avon and Frome from Hotwells to Totterdown into a vast floating harbour. The area covered by the harbour would be around 70 acres. Ships would enter the harbour via a lock at Hotwells, behind which would be an open area of water called Cumberland Basin . Parliament approved the plans and work started in 1803. The work was estimated to cost £300,000, but by the time the work was finished around £580,000 had been spent.

Besides the locks at Hotwells and the digging of Cumberland Basin a great deal of other work had to be done. A dam was built at Totterdown, the river Avon had to be diverted along a channel that had to dug from the dam to Hotwells, this channel is known as the New Cut. A common idea is that French prisoners of war from Napoleons armies were used to dig this channel, but I can't find any evidence of this, the work being done by navvies. Another canal was built from the dam to the River Avon at St. Annes, this is the Feeder Canal. The purpose of this was, and is, to provide access for the barges heading from Bristol upstream to Bath.

The improved docks should have been a boon for the city, but many members of the City Council were also members of the Mechant Venturers Society or the Docks Company, some were members of all three organisations. This obviously created a conflict of interest as everyone wanted the money they had invested in the Docks Company repaid, and repaid as quickly as possible with profits. The way they chose to do this was to increase the rates charged on the new docks. The charges became so high thay many companies stopped using the docks preferring to land goods at ports such as Liverpool where the rates were much lower, which was the very reason the docks were built in the first place. Many Bristol traders even transported goods overland or by inland barge to the docks at Liverpool rather than pay the rates imposed on them for using the port at Bristol.

Due to the work of John Wesley and others in Bristol, when the slave trade was abolished in 1807 it was already in decline here and as such didn't affect Bristol much. In 1833 the slaves were emancipated in theWest Indies and that was a severe blow to the port. The freeing of the slaves caused the collapse of the sugar industry in the West Indies. Plantations in Jamaica were abandoned, the price of raw sugar rose and the refineries in Bristol went into decline. In 1830, 63% of Bristol's trade was with the West Indies, by 1840 it was down to 40%, in 1871 it was 29% and by 1890 there was nothing left.

In 1835 the Municipal Corporation Act changed the constitution of the City Councils. The new Council wasn't quite so cosy with the Docks Company and started a campaign against its methods of raising revenue. By 1848 it had had enough, bought the Docks Company and started on a series of changes, improvements and repairs. The rates were reduced and trade through the port increased. In 1865 and 1870 there was enough money coming in to improve the docks still further, and in these years new locks were installed at Cumberland Basin and better transit sheds, hydraulic cranes and granaries were built.

By now ships were getting bigger and bigger and the age old problem of what to do about the approach to the city docks had to be faced once and for all. In 1867, when the old Hotwells pump was demolished Hotwell Point, a promontory into the river, was also removed but this wasn't enough. The Council had a choice, either improve the course of the River Avon or build new docks at the mouth of the river. One plan was to intall dams and locks at the mouth of the river and turn the whole of the Avon into a vast floating harbour but this was very impractical. The cost of improving navigation up the Avon was calculated as being four times as much as building a new dock, and so in 1877 the new docks at Avonmouth were opened. In 1879 another new dock was opened at Portishead, both were linked to Bristol by railway and so all three docks were in competition with eachother. In 1884 control of all three docks was in the Corporations hands and improvements made to all of them. In 1908 the Royal Edward Dock was opened at Avonmouth and later improvements made this the best of the three.

During World War I Bristol moved vast amounts of men and material through its ports. In 1928, new grain elevators were intalled at Avonmouth and suction equipment to unload grain ships as fast as possible. New oil and petrol storage facilities were built and in 1941 the Royal Edward Dock was enlarged. Since the 1930's Avonmouth has been, and still is, a major industrial centre.

During World War II the ports became targets for heavy bombing, the City docks more than Avonmouth or Portishead, but these ports were badly needed, especially the ones capable of unloading oil and petrol at Avonmouth. These became so important that pipes were laid to carry the oil straight to London and other parts of the country. For twenty years after the war, trade at Avonmouth continued to increase but the City docks were in decline, the bigger ships were no longer able to navigate the Avon, even if they wanted to.

In the 1960s Britain needed new deep water ports and in 1964 the Council proposed the building of a new dock at Portbury. After this was rejected a new plan was advanced in 1967, this too was rejected. In 1971 the original Portbury plan was revised and work started in May 1972.

Royal Portbury Dock was estimated to need £15 million to complete, the final amount actually spent was £37 million, but the port is now very busy being used, amongst other things, for the import of cars. Another advantage for it is that it can handle ships three times the size that can enter Avonmouth.

By the 1980s the last ships to use the port of Bristol commercially were gone. The docks took on a new life as the developers moved in and converted many of the old warehouses into exclusive apartments and studio flats. For a while it looked as if the only people who were going to be able to enjoy the docks were the well off but, for all its faults, the Council has ensured that the old docks are open to all.

The Sand Diamond company was to be the last company using the City docks commercially. Within a very short time these too were gone.

The Council tried hard to attract new users to the docks. For a while Grand Prix boat racing was held in the City docks. Unfortunately the docks are too narrow for this type of racing and the dock walls very unforgiving of anything that crashes at speed into them. After several fatal accidents Grand Prix racing was stopped.