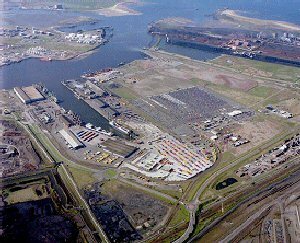 PD Teesport's major cargo handling facility, Tees Dock, is located 5 nautical miles from the mouth of the River. It is one of the few deep water tidal facilities in the UK. It is well placed to serve the transport demands of Europe and continental transhipment, handling approximately 50 million tonnes a year. The wide range of facilities includes Roll on/Roll off, bulk facilities and the Tees Dock Bulk terminal operated by Cleveland Potash (over a million tonnes of potash and salt handled in a year). The Steel Export terminal also handles over 1 million tonnes a year for Corus and the Container terminal facility is enjoying considerable growth. The port also handles forest imports - tropical hardwoods and fibreboard from West Africa, Asia and America, as well as pulp and softwood from Scandinavia.

In addition to the central location of Teesdock, there are numerous wharf and jetty operators on the banks of the River Tees. These companies focus on the handling and storage of mainly liquid and dry bulks. Some offer specialist support services to the oil and gas industry, including ro-ro and load-out facilities.

Dawson's Wharf (AV Dawson) has developed into the largest independent dry cargo wharf on the river handling about 400,000 tonnes a year, including bulk non-hazardous chemicals and minerals imported for local producers. It has 500 metres of rail-connected river frontage accommodating ships of up to 5,000 dwt.

Cochrane's Wharf is located between Tees Offshore Base and the Transporter Bridge. A 100 metre stretch of river frontage at this site is operated by W.G. Readman Limited who plan to further develop the facility. Tarmac Aggregate operate on a 5 hectare site dedicated to the import of marine dredged aggregate.

Downstream from Cochrane's Wharf is Normanby Wharf, a 100-metre quay with a depth of 5.1 metres at LAT operated by Baldwins Industrial Services.

Over 8 million tonnes of imported cargo is handled annually at the Redcar Ore Terminal, a deep-sea bulk terminal operated by Corus. The facility handles some 100 Cape size and Panamax size vessels a year.

The bulk terminal of Cleveland Potash at Teesport is used as a distribution centre for products mined at Boulby with 500,000T of potash going out by sea. Cargoes handled for third parties include 250,000 tonnes of export grain and bulk minerals.

A range of bulk liquid and gas storage facilities enable Vopak Teesside to meet the needs of its customers, principally the major chemical producers of Teesside, in the most flexible way possible. The Simon Group has acquired ICI's Riverside Terminal to add to its Seal Sands Terminal. Both companies operate considerable tank storage facilities which are fully integrated with the adjacent petrochemical complexes at Billingham and Wilton. Customers are connected by a series of pipelines which transfer cargo from quayside storage to customers located on both sides of the river.