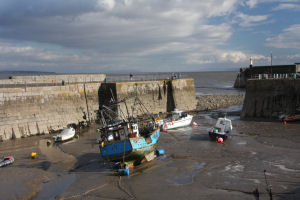 The historic harbour with its old Lighthouse, Watchtower and Lifeboat Station used to be a busy exporting port and fishing harbour before the huge docks at Cardiff, Barry, Port Talbot and Swansea eclipsed them in size and capabilities. In the 19th century large quantities of coal, iron and coke were shipped from Porthcawl, the produce of the mineral districts of the neighbourhood.

In 1840 the docks were enlarged by extending northwards and in 1847 the Llynfi Railway Company was formed and immediately took over the Duffryn, Llynfi and Porthcawl tramroad railway.

In 1864, the dock was improved with alterations to the original entrance to the outer basin and lock gates for the inner basin, to retain a high level of water in the 7½ acre lake area allowing larger vessels to visit the port resulting in increased activity. In 1865 Porthcawl dock was eventually connected to the Llynfi and Ogmore Valleys by a steam railway mainly due to the Brogden family, from Manchester. They had iron interests at Tondu and coal interests in the Ogmore Valley. By 1871 the port exported 165,000 tons of coal compared with just over 17,000 seven years earlier.

By 1878, port trade had halved due to the decline of the iron industry but was supported briefly by an upsurge in the use of coal. In 1889 the port handled more than 800 vessels with ¾ of them loaded with coal. The future looked rosy until the new docks were opened at Barry in 1889 and in Port Talbot in 1898. They were larger, deeper and far more modern and in 1903 Porthcawl only handled 2767 tons. The inner harbour was closed in 1906 and ships used the outer harbour till 1911. The inner harbour became a popular recreational area with boating and bathing until it was subsequently filled in during the Second World War. It is now a car park known locally as Salt Lake, but the entrance to the old harbour can still be seen in the outer harbour area.

During the summer months the historic ship, Balmoral, leaves Porthcawl Harbour for cruises along the Bristol Channel.