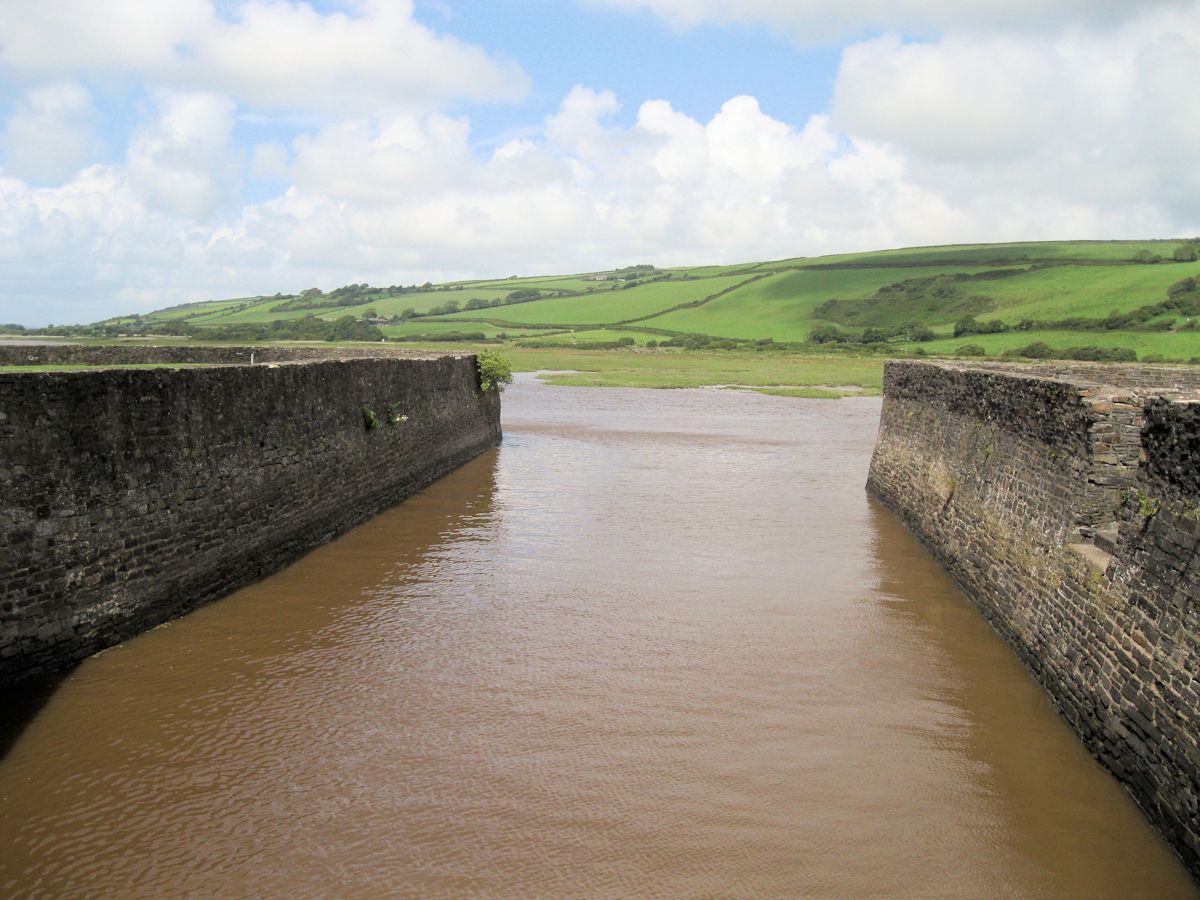 The town and port of Kidwelly owe their origins to the establishment of the castle in the first decade of the twelfth century on the bank of the little or lesser Gwendraeth river. It was sited with military considerations foremost in mind and the river was a vital element in the choice. Near the highest point reached by the tide rose a steep scarp which was incorporated into the castle's defences but above all, and especially when the Norman hold was still tenuous, the river gave ready communication with the sea some two miles away in terms of opportunities for escape, for the provisioning of the household and the re-enforcement of the garrison. Indeed the likelihood is that the original Norman penetration of the land of Kidwelly, was ship borne.

Within the outer defences of the castle was planted a township, later a borough, of foreign settlers  French, English and Flemish - whose activities were intended to consolidate the conquest. Primarily, they were agriculturalists supplying their own needs and those of the castle's household but gradually as the Norman hold tightened, in spite of set backs in Welsh attacks, there arose opportunities to expand beyond the requirements of a local retail economy centred in market and fair and to trade with Bristol, the dominant port of the Severn basin, and with overseas. The earliest record of such enterprise was in 1229 when Henry III granted a certain Robert of Kidwelly, ship master, licence to trade with Gascony.

The strategic and military significance of the castle in the Welsh wars of the late thirteenth century served to expand the importance of the port and its links with Bristol and other West Country ports.

Some evidence that vessels of relatively substantial tonnage were working out of the port is afforded by Edward I's order, which included most of the South Wales ports, for the impressment of ships of 40 tons or above to convey from Winchelsea troops and supplies for his campaign against the Scots in 1297.

In the more peaceful and settled conditions of the fourteenth century the town expanded beyond its original narrow confines within the shadow of the castle, an expansion which required the bridging of the river and the probable siting of wharfs in its vicinity. New immigrant families contributed to its growing commercial prosperity which rested firmly not only on a monopoly of local trade by the burgesses but also upon its overseas links.

By the early years of the sixteenth century trading links were faltering. The reason was the silting of the estuary. The entrance of the Gwendraeth into the mouth of the Towy was being choked by a large sand bar making passage up river to the town uncertain and hazardous. The evidence for the decline in activity is well documented. John Leland in the 1540s described the haven as 'sore decayed' and a report by local Commissioners in 1566 described Kidwelly as 'late a port and now with scarcely a landing place'. It was controlled by the Mayor and bailiffs and its trade supervised by them, 'if there were any ships or vessels'. Camden in his Britannia in 1586 observed that whereas traders had been attracted to the town by the convenience of a good harbour it was of not great use in his time being choked with sand.

By the late seventeenth century the vagaries of shifting sand had permitted much easier passage up river and John Ogilby in 1675 described Kidwelly as deriving a considerable trade in clothing and maritime affairs. This revival was undoubtedly connected not only with the clothing industry but also with the increasing use of the port as an outlet for the coal and culm in the valley of the other Gwendraeth river in the vicinity of Pontyberem and Pontyates. The earliest of these shippers of whom there is record was James Clarke, made Burgess in 1683 and Mayor in 1693. An inventory of his possessions includes a boat, coal, culm, the small of anthracite, ropes and other implements belonging to coal pits. He put down his coal on the river bank near the bridge in the centre of town, Clarke's Bank as it was to be called for many years.

Clarke's example was followed by Walter Rees of Foy near Pontyates who leased coal seams from the Vaughans and Brigstockes and built a quay. Rees had the rare distinction of being disenfranchised as a burgess in 1715, if only temporarily, for refusing to pay town on his coal. Thereafter, throughout the eighteenth century the banks of the river below the town bridge began to be lined with storehouses, wharfs and coal years.

Coal was not the only commodity to be exported. Lewis Rogers owner of the Tin Mills about a mile north of the town leased a storehouse in 1768 and built a quay from which he dispatched boxes of tinned sheets to London and Bristol. Supplies of tin came in from Cornwall.

Added to this burgeoning of maritime activity was the enterprise of Thomas Kymer who between 1766 and 1768 built about a quarter of a mile down river (below the present railway bridge) a three mile canal and a proper dock to link with his pits in the lower valley of the other Gwendraeth river in the vicinity of Carway. His agent Richard Evans reported that at certain times some 25 ships lay in the river waiting to load.

These cargoes were shipped to many ports in the West Country and in Southern and Eastern England  Ipswich, King's Lynn and Sunderland. Welsh ports too were well represented, particularly those in North and Mid Wales.

Allied to all this activity was ship-building. The medieval burgesses had been granted the liberty of ship bote by charter, which allowed them to fell timber for their vessels under the watchful eyes of the Lord's foresters. Of the eighteenth century builders the best known and most successful was William Raynor, shipwright of Carmarthen who married a Kidwelly girl in 1782 and settled in the town. He was at first engaged in building and repairing barges for Kymer's canal and that of the Earl of Ashburnham which ran from the foot of Pembrey Mountain and across the marsh to the estuary. He then started a more ambitious project and leased in 1803 a portion of the river bank close to the bridge for a building yard. From then until his death in 1817 he launched a variety of vesselsbrigs, snows, sloops, the largest being the square sterned brig Margaret of 163 tons built in 1814. Its master was George Thomas the Younger of Kidwelly.

That Kidwelly was a busy mercantile centre is borne out by the Parish Registers which in addition to mariners, pilots and captains, record an abundance of craftsmen whose occupations depended on the seashipwrights, ships carpenters, ropemakers, and anchorsmiths. If confirmation to its nautical character is required it is supplied by the names given to inns and public housesThe Pilot Boat, The Jolly Sailor, The Hope and Anchor, the Ship and Castle, the Yarmouth Arms. The employment which the port generated was reflected in the range of processing industries such as cooperage, distilling, brewing and carting particularly the conveyance of coal from the Gwendraeth valley. At another remove it stimulated a growing number of merchants and shopkeepers. Thomas Evans rose from obscure and humble origins to become a shipper of coal from his two quays, part owner of several of Raynor's vessels and a prosperous shopkeeper.

Today's visitor standing on the bridge and looking down river must by forgiven for not realising that this was a port of consequence, so utterly have all traces of its former activity vanished as though it had never been.

Ominous signs of decline were appearing in the first decade of the nineteenth century. The insidious movement of sand was as of old causing problems of navigation. At the end of the eighteenth century the Gwendraeth's channel into the mouth of the Towy was a good one and ships drawing 16 to 18 ft of water could easily get into Kymer's dock, but by 1801 it was being sanded up. A new channel, the Guy, was excavated and solved the difficulty for a time but by 1809 it was proving ineffective in spite of the great rise of spring tides. Fruitless efforts to restore it were made by the Kidwelly and Llanelly Canal and Tramroad Company formed in 1812 to cater for the expanding coal production in the district in conjunction with an improved and extended canal system to serve the Gwendraeth valley. The directors then called in John Rennie the engineer in 1819 but his report the following year was not encouraging. He put forward a scheme but pointed out that its cost was too heavy for what was likely to be only a temporary improvement. By 1836 however the vagaries of shifting sand had evidently permitted easier access so that four Kidwelly ship masters asked to report on the state of the harbour declared that they would have no hesitation in conveying vessels of 400 tons with a draught of 16ft of water on a four hour flood up to Kymer's dock. Two years later the canal system was already linked with the new Burry Port Harbour where there was deeper water and so diverted the bulk of the coal traffic from Kidwelly.

The end of activity at the town quays came when the South Wales Railway Company constructed a fixed bridge across the river, opposed only half-heartedly by the Corporation who held out briefly for a swing bridge. Thus passage for even the smallest vessel was closed.

It was not the end for Kymer's dock which continued in use up to the early years of this century, mainly for shipments of coal coastwise to Laugharne, Carmarthen, St Clears and Llanstephan. There seems to have been sufficient traffic to encourage the Corporation to lease it from Baron Dynevor in 1872 and in the following year the Burry Port and Gwendraeth Valley Railway Company opened a branch line to it, alongside the canal, long since disused. The Llanelly Guardian reported that in 1874 a dozen collier ships were loaded in one week, including one from Cardigan. In the 1890s and early 1900s the nearby Silica Brickworks used it extensively connecting it with a short tramroad. The steam William Dawson in 1894, loaded 320 tons for Middlesbrough, the Lynx 250 tons for Cumberland, and the Captain Cook and the Dunvegan with similar amounts for Glasgow and Newport respectively. But by 1914 this traffic was carried by rail. The last, faithful users to tie up under the coal chute were boats from Llanstephan in the 1920s. Thereafter it fell into complete disuse and in the 50s the West Dock was utilised by the Corporation as a dumping ground for municipal refuse.

So after centuries of maritime activity, which undoubtedly contributed to its growth and prosperity, Kidwelly finally turned its back on the sea.

In the early 1990s an MSC-funded scheme has restored crumbling walls, excavated the West Dock and cleared a goodly stretch of the canal. The area will be used for leisure purposes and for townspeople to turn again to the sea, this time for recreation and pleasure.