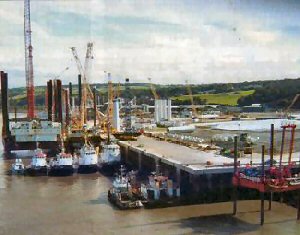 Mostyn's port dates back four centuries to when the estuary was the key trading centre for the North West coastline. It was a haven for sailing ships navigating the estuary. Mostyn had several coalmines and, later, an ironworks.

Both industries flourished during the 19th century and by 1880 were providing work locally for 2,000 men. The site was one of the industrial powerhouses of North East Wales. The ironworks closed as recently as 1961 and the works was dismantled four years later.

Thomas Wards of Sheffield bought the entire site for scrap value. RTZ acquired Wards in the early 1980s but disposed of the non-core business to Faber Prest in 1983.

Today, Mostyn is primarily an export port, shipping consignments of steel for Corus to customers around Europe and handling other cargoes such as animal feed, fertiliser and aggregates.

Access to Mostyn docks has for years been restricted by the need for ships to sail in at high tide but now the port is able to offer ships the size of P&O's Irish Ferries round-the-clock access thanks to an intensive dredging programme.

A deepening of the outer berths to eight metres allows the port to accommodate ships of up to 24,000 gross tonnage, taking Mostyn out of the small port category, putting it in the medium-size class and enabling it to significantly extend its trading area to as far as the eastern seaboard of the United States, West Africa and the Middle East.

The dock's transformation from a small-time player was made possible with a multimillion pound investment under the Welsh Assembly and industry chiefs believe the redevelopment will give the region a huge boost.

In 2004 the port experienced the loss of its ro-ro ferry service to Dublin but has redeveloped new markets instead, in particular the transhipment of Airbus A380 wings which are transported by barge from the Airbus factory at Broughton and transferred to ocean going ships which then take them to Bordeaux.

In recent years, Mostyn has become a major player as a base for the Offshore Windfarm Construction and Support Industry. It has seen four major wind farms constructed from Mostyn over the last five years, the furthest being Robin Rigg in the Solway Firth.