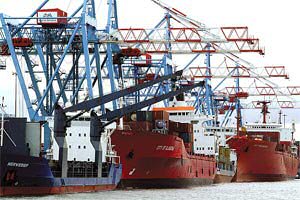 The Port of Liverpool dominates Britain's container trade with North America and serves more than 100 other non-EU destinations from China to India, Africa, Australia, the Middle East and South America.

The Port is the UK's leading gateway for imports of grain and animal feed, for the export of recycled metal and the movement of freight between Britain and Ireland.

Liverpool is planning a second container terminal to be built in the River Mersey at a cost of £100 million and able to simultaneously accommodate two of the new generation post-Panamax container ships. The new facility, capable of handling 500,000 teus a year, will almost double Liverpool's container capacity to nearly 1,500,000 teus.

The Port's cruise trade which has been developed from an initial three sailings in 1992 to more than 30 planned for the 2008 season, received a major boost with the official opening in late 2007, of a new cruise terminal enabling the largest ships to berth alongside Liverpool's iconic Pier Head.

The Port of Liverpool is also home to the UK's largest free zone, Liverpool Freeport, accommodated in more than 3 million square feet of warehousing with another 400,000 sq ft planned, bringing the port's total logistics accommodation to more than 4 million sq ft.

Two of Liverpool's former docks, including the iconic Albert Dock, are included under 'More Photos'.