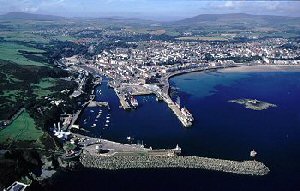 Unlike Castletown and Peel Douglas has very little to offer historically. Originally an unimportant fishing hamlet, Douglas first began to look up in the eighteenth century when Smuggler Bill and his confederates discovered how convenient a base it was for operations in England. When Free Trade and the Exciseman between them stopped the smuggling Douglas drooped again. About 20 years later in 1830 the idea of a regular ferry service from Douglas to Liverpool. This coincided with the start of tourism and brought about the growth of Douglas which led it to become the Isle of Man's capital.

The main port of the Isle of Man with the most extensive facilities for both commercial and private vessels, Douglas is the only Manx port with dedicated passenger handling facilities and roll-on roll-off vehicle services. The port provides specialist berths for oil and gas tankers as well as general cargo vessels and fishing boats and occasional survey, customs and naval vessels. The Isle of Mans first marina was opened during 2001 and offers a limited number of berths for visiting leisure craft, subject to availability. Substantial ongoing investment is continuing to further enhance the harbours facilities. A private towage service is available and a commercial inshore passenger ferry operates various services throughout the summer season to other ports.

The inner harbour marina (accessible at approximately high water +- 2 hours) is the main area for visiting leisure craft to berth but there are also berths in the outer harbour which are less dependent on the tides. A summer-only pontoon is available for short periods at all states of tide at the Battery Pier.

Commercial vessels can find deep water berths in the outer harbour whilst large vessels such as cruise liners may be restricted to anchoring in the bay and use tenders to carry passengers ashore.