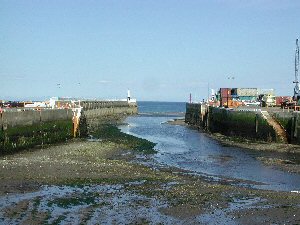 During the middle of the 19th century it was Ramsey that led the way in shipbuilding. The very first oil tanker, or ship designed to carry bulk oil, was built in the Ramsey shipyard. She was called "The Jane" and there are records of her on passage to Ramsey from Philadelphia with a cargo of bulk oil in 1853. Later that same year was launched in Ramsey the famous Euterpe or "Star of India" as she is now. She is still in remarkably good condition, and is preserved as a floating musuem in San Diego.

This is a well sheltered port but access can be difficult in strong easterly winds as the entrance is via a narrow channel between two breakwaters. The harbour is busy with commercial vessels dealing with regular lo-lo services from the United Kingdom and Ireland and is the only Manx port with facilities to handle imports of bulk cement. The harbour, directly alongside the town centre, also has its own small shipyard, used mainly by local and visiting fishing vessels. The disused Queens Pier in Ramsey Bay was built in 1886 to provide a low water landing for passenger ferries and was last used in 1970. Debates continue on the various proposals currently being considered for its future.