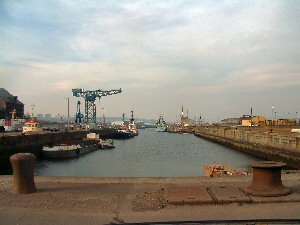 Greenock, situated on the south side of the Firth of Clyde began as a fishing harbour and was developed into a port during the 17th Century for the herring trade. It became a burgh in 1635 and in the 18th and 19th centuries it became a major centre for shipbuilding and a departure point for emigrants.

Greenock Ocean Terminal hosts some of the world's most famous ocean liners - for instance, the QEII, which was built on the Clyde - and also is a regular port of call during the summer months for PS Waverley, the world's last seafaring paddle-steamer.

Clydeport's history can be traced back to 1966 when the Clyde Navigation Trust, the Greenock Harbour Trust and the Clyde Lighthouses Trust all merged to form the Clyde Port Authority. The Authority, owner of Glasgow, Greenock and Androssan ports, was privatised in 1992 and was subject to a management buyout soon after.

The sugar Trade between the Clyde and the West Indies began about 1732, but by 1775 the total sugar imports did not amount to more than 4,000 tons, of which, a very small proportion went to Greenock. By 1852 the refineries of Greenock were employing 700 men and turning out 50,000 tons annually, and it was then the largest depot for raw material in the kingdom. Twenty years later there were fourteen or fifteen large refineries in operation producing about a quarter of a million tons annually, giving employment to thousands of hands, filling the harbours with ships of all nations with the raw material from every sugar-growing region of the world. Spanish ships from Cuba, Dutchmen from Java, the Newfoundland fleet from Brazil, Glasgow traders from the West Indies and Mauritius, and coasting steamers from France and Belgium with cargoes of the beetroot that was beginning to come into the market. Greenock's association with sugar continued until 1997 when the last sugar boat docked at Greenock Ocean Terminal on 20th June. Grennock's other industries included engineering, oil-refining, distilling, paper, pottery, glass and barrel making.