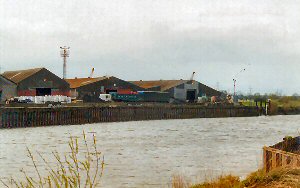 The Trent has always been the life and soul of Gainsborough, Britain's most inland port; indeed, it was the river which brought the first settlers. The tribe of Angles called the Gainas sailed up the Trent soon after the Romans had left. Protected by the river to the west, by marshy ground to the north and south and by easily guarded high land to the east, the site was an ideal one for a new settlement even though the Romans had always ignored it. The Trent provided access to the sea via the Humber and to the interior of the country, and soon the Gainas' Burgh as it became known, grew up.

Gainsborough soon became prominent as a port and was named in 1322 as one of the ports used for supplying corn to the king. As Torksey, at the junction of the Foss Dyke and the Trent, fell into decay, so Gainsborough's importance grew throughout the fifteenth century and beyond.

In the seventeenth and eighteenth centuries the industrialised midlands imported and exported extensively through Gainsborough. The building of a new bridge across the river in 1790 allowed Gainsborough to expand along both banks, but the dawn of the railway age and new rail links to Grimsby and Hull spelled the end of the town's most prosperous era, as it did for so many others.

Nowadays, few vessels sail as far up the Trent as Gainsborough, but pilots are available from ABP in Hull.