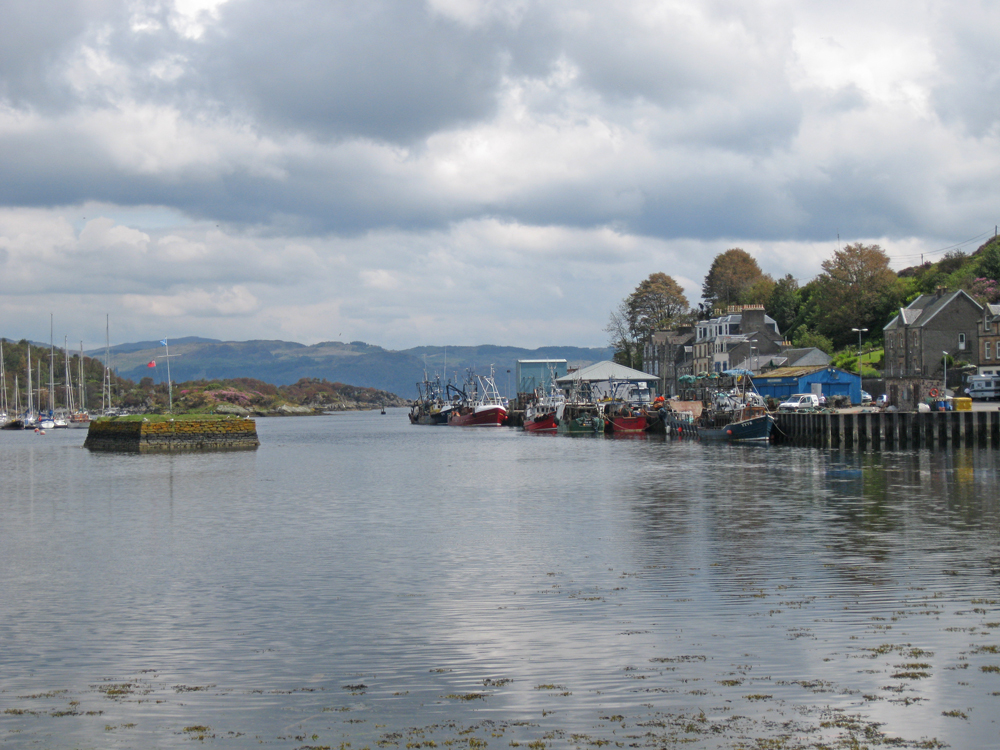 The small inlet of Loch Fyne, known as East Loch Tarbert, has been used as a sheltering place for over a thousand years. Even before Magnus Bareleg negotiated the isthmus, fisherman and traders alike used this landlocked harbour.

The nineteenth century saw Tarbert beginning to take on the appearance of the town we know today. In 1809 a memorial was presented to the Parliamentary Commissioners to persuade the Government to undertake the renewal of the land breast (originally constructed by the Proprietor) and the enlargement of the Quay. Although the population of Tarbert was still less than 1,000 people at this time, the village was recognised as "one of the most considerable places in the West Highlands on account of the excellence of its harbour". The proposed works were undertaken shortly thereafter, opening the way for the subsequent development of Harbour Street. Improvements to the harbour entrance were made at the same time, by the removeal of some large rocks. The present breast wall is largely unaltered since that date.

With the advent of steam passenger ships a pier was required to be built at the outer harbour. These vessels were unable to safely naviagate the narrow entrance channel to the inner quayside. An attempt to build a concrete pier at Mealldarroch Bay ended in failure when a storm destroyed it before it came into use. Little remains to be seen today, but "Glendarroch" a house which stands nearby was the intended residence of the Harbour Master.

A wooden landing place was subsequently built around 1870 in a more sheltered position. The fine villas on Pier Road were constructed shortly after its opening. Later extended and recently subject to a major repair this pier is still in regular use.

Many schemes were undertaken in the past by the "Proprietors" (Campbell Of Stonefield), such as the "new" breast wall, extension of the quay, and a road to service the new steamer pier. The Harbour Trust, formed by the Act of 1912, has continued this work.

The large herring landings of the 1940s, 50s and 60s contributed to periodic improvements, to make today's extensive and well constructed quay. Major works have recently brought fish landing and market facilities to modern standards. Despite the decline in the fortunes of the fishing industry Tarbert is still the base for a modest fishing fleet, carrying on the tradition of centuries.

The Steamer (East) Pier has also been the subject of restoration work. Recent repairs ensure that the pier can remain in use for a further twenty years at least. Increased visits by pleasure steamers and other vessels have justified the expenditure incurred.

A link between Tarbert and the Cowal Peninsula was re-established in 1994. The necessary slipway infrastructure was funded by Argyll and Islands Enterprise and a summer car ferry service operated by Caledonian MacBrayne. Such was its success that all expectations were exceeded; a demand is evident for an all year round service (see photo of ferry slipway in 'More Photos').

The current interest in yachting and an increasing demand for marine-orientated leisure facilities, has not been ignored by the Commissioners. The past fifteen years have seen the introduction of pontoon berthing with later additions to the original installation. Car parking and more recently a toilet and shower block have also been provided, making Tarbert a popular destination for ever greater numbers of pleasure craft. New pontoon berths have been recently installed. This involved the replacement of existing pontoons and the installation of 80 new finger berths. The work was funded by Crown Estates with a leaseback arrangement to the Harbour Authority.

The Commissioners' policy of improving facilities whilst holding charges to a minimum has no doubt contributed to an over-subscription for the available permanent berthing spaces. Tarbert is regularly used as a base for several high profile yacht races.

A recent Harbour Development Study has identified the likely future requirements of the various interests. The study also offers a number of solutions to satisfy the perceived future demands of both commercial and leisure users. However, any extensive harbour development will require to be planned with care and considerable sympathy. The need for further improvements must be tempered by safeguards for the unique features of the town and its bay.