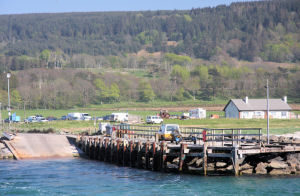 Tayinloan is on the west coast of Kintyre about 12 miles south of Tarbert. Caledonian MacBrayne operate a car ferry between Tayinloan and Gigha. The first ferry service was started in November 1980. Those ferries carried only six cars and as they only had one ramp, all the vehicles had to be reversed on at the Gigha slip. In 1992 the present ferry MV Lochranza came on this route. She carries 12 cars and is a roll on roll off ferry which makes it much easier for the car drivers.

Early records of the locality are very scare but like other parts of the Western Highlands emigration to the New World began as early as 1739, mainly to the Carolinas and later to Canada, Australia and New Zealand.