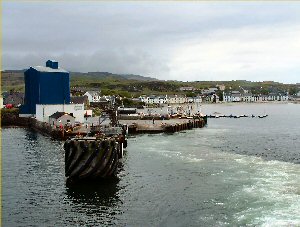 Port Ellen, built around Loch Leodamais, is Islay's main deep water harbour and, with Port Askaig, one of two ferry terminals on the island.

The town was founded in 1821 by Walter Frederick Campbell, then Laird of Islay, and was named after his wife. Port Ellen itself occupies two bays on the loch, between which is the rocky outcrop housing the harbour facilities.

Improvements to the pier at Port Ellen, as well as to the Kennacraig terminal on the mainland, are planned at an estimated cost of £14M.