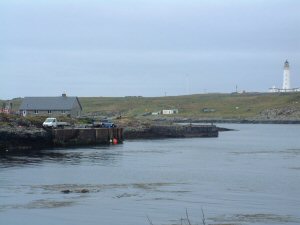 Portnahaven lies at the south-western tip of the Rhinns of Islay, the peninsula that wraps around the north side of Loch Indaal.

Orsay and its smaller neighbouring island of Eilean Mhic Coinnich shelter the harbour of Portnahaven from the weather coming in from the south and west. This was an major factor in choosing this site for these settlements when they were set up to house people cleared from the interior of Islay in the early 1800s, and provide them with an alternative living.

Since 1989 the tip of the Rhinns of Islay has been the site of an experimental wave powered turbine generating electricity. In 2000 Wavegen Islay started commercial power generation here, using the air compressed by waves in a large underground concrete chamber to power a turbine. This, in turn, makes a significant contribution to the power supply of the island.

Although the once abundant fish stocks have now declined the harbour still boasts a number of small boats in its narrow harbour.