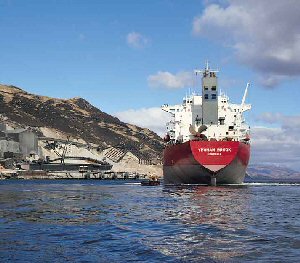 The quay and quarry at Glensanda is owned and operated by Foster Yeoman, a major supplier of coated stone producs. Some 6m tonnes of granite are exported annually from Glensanda, placing it in the top twenty of all UK ports for exports. Nearly 5m tonnes is exported to Norther Europe in Foster Yeoman's self-discharging ships.

The quay at Glensanda started operations in 1986 when the first ship load of granite left for Houston, Texas. John Yeoman had bought the Glensanda estate four years earlier.

Glensanda involves the quarrying of en entire granite mountain, Meall na Easaiche, before transporting the pulveried granite along a mile of conveyor belts in tunnels to a jetty, where it is loaded directly into bulk carriers.

Glensanda is only accessible by sea and so the company leased two large ships to transport the stone to the markets in Europe and the UK. The Yeoman Brock carries 75,000 tonnnes and the Yeoman Bank 37,000 tonnes. These were supplemented in 2000 by the purchase of Yeoman Bridge with a capacity of 97,000 tonnes.

A private ferry runs across Loch Linnhe from Glensanda on the Morvern coast to Port Appin north of Oban. This ferry allows local people to work in the Glensanda superquarry.