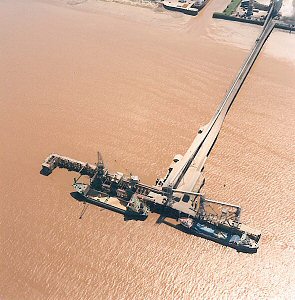 Before 1803 there wasn't even a New Holland, but just the creek somewhat opposite Hull on the south bank of the Humber. A small ferry service started from the creek in 1825, in fact a front for smuggling goods, especially gin, and it was Hollands gin that gave impetus to the naming of the place.

After the opening of the Humber Bridge in June 1981 the ferry was decommissioned. New Holland Pier was taken over by New Holland Bulk Services, who started a grain and animal food import and export in 1984.

New Holland Bulk Services is owned by HES Beheer, a Dutch holding company for providers of logistical services in ports.