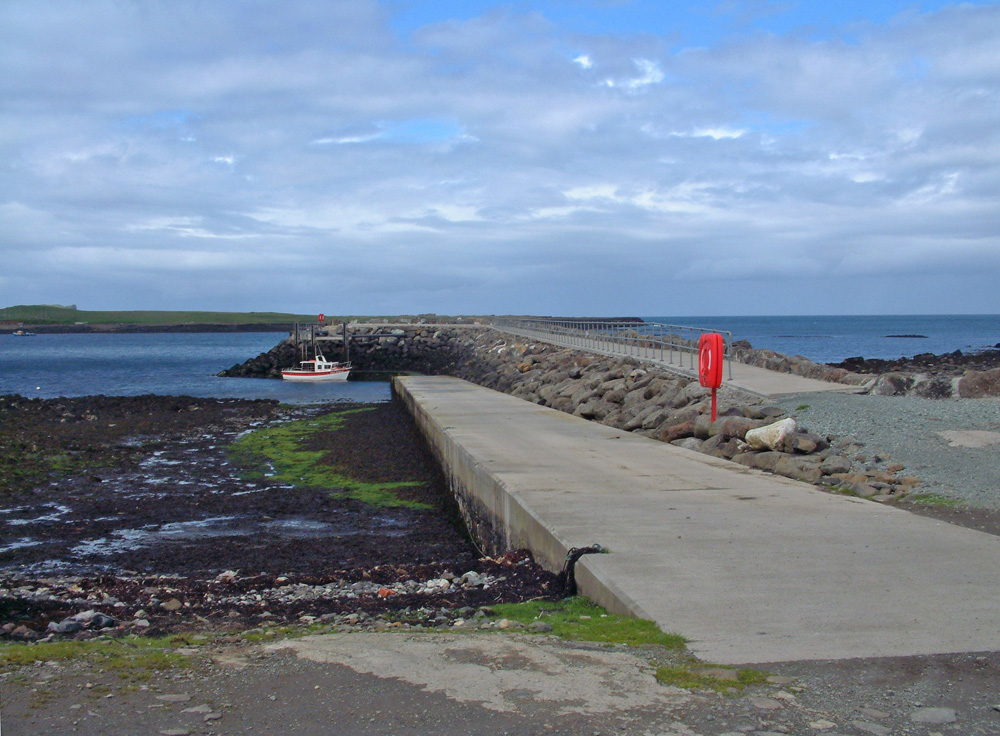 The original structure was built by the Congested Districts Board in the early 1900s. Using a local labour force a new stone built slipway was created along with a store to allow freight to be unloaded and stored at òb nan ron. Previously there had been no suitable place within the district where supplies could be taken from the small boats that plied between Glasgow and the islands. (The first steamship to service Skye was inaugurated by Messrs. Hutchinson around 1830). These cargo and passenger boats would anchor in the bay and transfer their cargo to small commissioned boats to be taken to shore.

The mouth of the Kilmartin river was initially the site used and later the sands at Clach nan Cuidigeann. Small storage huts were located at the sands but these were inadequate for the task and a new slipway and storage facilities were required. The formation of a new slipway was a major improvement to the quality of life in the area. For the first time there was a landing point where transportation could be taken direct to the jetty head. Goods no longer had to be manually hauled to the nearest road. Additionally, the new store allowed goods to be stored giving more time for the dispersal of goods, much of which was going to the local shops.

The slipway remained an essential facility until the beginning of the War and Dòmhnall Ruadh from Stenscholl supplemented his income by providing a haulage service from the slipway to any part of the community. The rock used to form the slip was quarried on Stenscholl island and transported by boat to the site. The masonry work was done by incomers with labour supplied by locals who gave of their time freely for the benefit of the community. A survey carried out in 1995 by Wallace Stone & Partners described the slipway "of stone construction and follows the shore contours almost down to chart datum. The structure is well founded on rock and is generally in good condition".

Opened in June 2000 by The Princess Royal, the present slipway was built by the Staffin Community Trust, with funding from the EU. It is protected by a long breakwater.