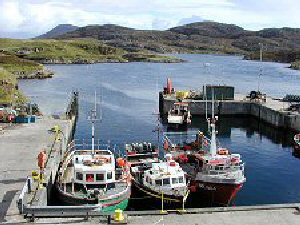 Kallin is situated at the south east tip of Grimsay. Grimsay is about four miles long by two wide, and is aligned from north west to south east. The harbour, built in 1985, has a growing fishing fleet. The boats from Kallin fish for shellfish using creels and flatfish using long lines. The area is also an important centre for fish farming. A sign of the importance of Kallin's fisheries are the number of vehicles from southern Europe picking up produce for markets and restaurants in Spain or Italy.

Grimsay is difficult to distinguish in the confused mass of shifting tidal sands, sea, lochs, islands and islets that occupies the area between North Uist and Benbecula.

The area is generally known as "North Ford". Until 1960 it was one of the most difficult obstructions to passage along the length of the Western Isles. A ferry linked Carinish on North Uist and Gramisdale on Benbecula, but could only operate at high tide. And there was a ford, the North Ford, usually only crossed with the help of expert guides. The route of the ford was marked with cairns, but shifted unpredictably with the sands, could only be passed for an hour either side of low tide, and was four miles long. For significant parts of each day the North Ford was too wet to ford, and not wet enough to cross by ferry.

This all changed on 7 September 1960 when the Queen Mother opened the North Ford Causeway. This five mile arc of single track road links North Uist and Benbecula via the western tip of Grimsay.