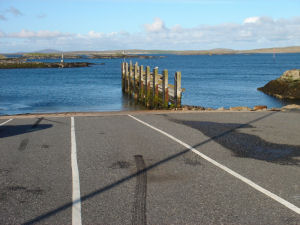 "The village of Leverburgh lies at the south end of the Isle of Harris. The village was originally named Obbe (hence the Gaelic name An-T-Ob) and later renamed Leverburgh in December 1920 after the soap tycoon Lord Leverhulme bought the South Harris estate from the Earl of Dunmore.

Lord Leverhulme set up a fish processing site at Leverburgh Pier, consisting of curing sheds, smoke house, refrigeration buildings, accommodation blocks, store sheds, houses for his managers as well as a harbour that was capable of providing berths for fifty herring drifters.

The second phase of his development would have seen the Obbe converted into an inner harbour, the channel to the sea was to be blasted and fitted with lock gates to keep a constant depth of water in the Obbe. Unfortunately this project never came off. It was 1924 before the first catch of herring was landed at Leverburgh, when twelve drifters from Great Yarmouth landed such a big catch (the likes of which was never to be repeated) that extra girls had to be taken in from the mainland to handle the large quantity of herring.

On Thursday 7th May 1925, William Hesketh, Lord, Viscount Leverhulme passed away. This had a major effect on the people of Leverburgh, work ceased and the workforce laid off. The Board of Lever Brothers, who did not have any interest in the Leverburgh project, sold the estate of South Harris, consisting of 33,000 acres in October 1925 for the sum of £900.

All that remains of Leverhulme's works are the houses that he built in Leverburgh. The local school (Leverhulme Memorial) was named after him. Today Leverburgh has a population of around 200. The past few years have seen a number of young people leaving the area due to poor job prospects; there is a major need for job investment within Leverburgh if only to keep local people from moving elsewhere.

The main employment in Leverburgh is the fishing industry and fish farming, with up to a dozen vessels working out of the port; the main method of fishing is creel/pot fishing, targeting such species as nephrops (prawns), crab and lobster."

The old fishing pier is situated next to the minimalist ferry terminal, where the car ferry from Aird Ma Ruibhe on Berneray arrives, having traversed the tortuous channels of the Sound of Harris.