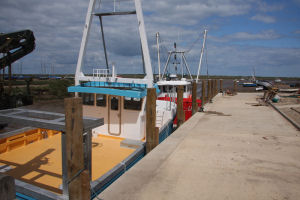 Brancaster was an old Roman port, known as Branodunum, the most northerly of a chain of fortifications along the east coast. 'Staithe' means landing place, or quay.

Brancaster was once a smuggling centre with locals shipping in goods from France illegally to avoid paying taxes. The nearby village of Burnham Thorpe was the birthplace of Norfolks most famous hero, Lord Nelson.

The clean harbour waters of Brancaster Staithe make it an ideal area for shellfish. The Large family have been making their living from this harbour for generations, selling to both trade and retail customers. From Olive House close to the Jolly Sailors Public House the family sell mussels, lobsters and crabs throughout the year, depending on the seasons.

Canoes and other boats are available for hire, as well as tuition for sailing, windsurfing and waterskiing. The link above will take you to the website of the Brancaster Staithe Sailing Club.

On 7 March 2007 it was announced that a new quay would be provided for Brancaster, funded by a number of organisations, including the European Union and the East of England Development Agency. The press report states:

"A £260,000 restoration project to vastly improve the fishing facilities in the North Norfolk village of Brancaster can go ahead after securing substantial external funding for the work. The construction of an entirely new quay, the stabilisation of the current historic quay, improvements to the coastal footpath and new interpretation panels explaining the significance of this site are to be put in place, with work due to commence this May.

This is a major development for members of the fishing industry at Brancaster who currently operate with poor facilities that cannot meet the surge in demand from restaurants and wholesalers. With this severe competitive disadvantage in mind, the new facilities will bring greatly improved efficiency to Brancaster's fishing fleet and help meet the existing high demand for locally sourced seafood.

The new works have the support of local people, the parish and borough councils and the Marine Fisheries Agency; and the generous funding awarded from the various major organisations involved in this project indicates the importance and benefit that the new quay will bring to both the local fishing community and the north Norfolk area as a whole.

The current quay at Brancaster was built in 1750 but has gradually deteriorated over the centuries. The Brancaster Staithe Fisherman's Society operating from the site is now currently forced to offload their catch onto a muddy bank via small dinghies instead of moored boats. Once the new quay is in place, the fishermen will be able land their catch onto a new deck directly from their vessels, providing an extensive, stable and safe landing area for the fisherman to work from in what can often be a harsh environment. The remaining historic quay will be re-pointed and repaired for the enjoyment of visitors to Brancaster quay.

The quay is due to be completed in Autumn 2007, with a potential second phase of development for the quay planned in 2008 for the erection of new fishing sheds. The sheds will be equipped with preparation and purification facilities that will allow fishermen to capitalize the returns of their hard work, leading to further employment and greater economic activity for the fishing industry in North Norfolk."

The quay is now completed, and the photos above show the quay in its new glory.