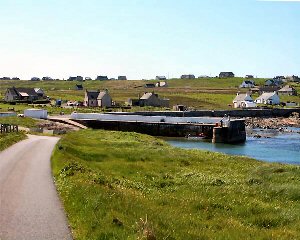 From article by Murdo Macleod - The Story of Portnaguran

Work on constructing the pier at Portnaguran started in 1952 and finished about a year later, sixty two years after the recommendation of the Walpole Commission in 1891 and one hundred and twenty five years after Portnaguran was first surveyed for a harbour in 1828. Too little, too late and totally inadequate. It stands dry 50% of the time, not due to silting up over the years, but because that is the way it was built. The only protection it offers is from the prevailing wind; it offers none from the waves and the storm surge rolling into Broad Bay. Certainly not the harbour of refuge envisaged by the 1891 commission.

Fishing out of Portnaguran is a far cry from what it was in its heyday and a far cry even from what it was when the pier was constructed. Boats being used today are much smaller and lighter than those of the fishermen of yore, and they dont carry tons of ballast, but they still have to be drawn up on the shingle in bad weather. The pier, as built, would have been equally inadequate had it been constructed in 1828 or 1891.