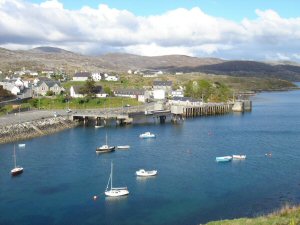 Tarbert is the main port and capital village of Harris. Tarbert is a fairly common name across Scotland and, here as elsewhere, it comes from the Norse tairbeart meaning draw-boat. Tarbert lies on the shores of East Loch Tarbert, and South Harris avoids becoming an island by just a few hundred yards of land over which the Vikings would drag their longboats into West Loch Tarbert to avoid sailing around via the Sound of Harris.

Little existed here until Tarbert was founded as a fishing settlement from 1779. From 1840 a new pier in East Loch Tarbert was the destination of weekly mail steamers from Uig in Skye, serving a new post district called Harris (to distinguish it from Tarbert in Argyll).

By 1894 Tarbert was the main settlement on Harris and a Harris Tweed mill had been set up here by 1900. By 1914 Ardhasaig and nearby Bunabhainneadar, a few miles to the north west, had become a centre for Scotland's whaling industry, but this suffered setbacks in the 1920s and closed down altogether in 1930.

Mailboats from Uig continued, though with increasing frequency, until 1964. On 15 April that year the MacBrayne car ferry The Hebrides entered service on the Tarbert, Lochmaddy and Uig route. Cars drove on via side ramps in front of the bridge and were then turned on turntables and lowered to a vehicle deck in the bowels of the ship capable of holding 50 cars.

These days Tarbert is a community of some 500 people still tightly gathered around East Loch Tarbert. With the success of the Sound of Harris ferry from Leverburgh, Tarbert is no longer the main port for travel from Harris to North Uist. But the importance of the link to Skye remains, and Tarbert these days benefits from the increasing flow of traffic using the Western Isles Spine Route.

In previous times Tarbert was at the less populous end of a world that encompassed just Harris and Lewis. Now the Sound of Harris ferry makes it nearer the centre of a world that extends from South Uist to Lewis. And with the improvements to both the Sound of Harris and Sound of Barra ferries in 2003, Tarbert will increasingly benefit from being at the centre of a single day's drive from the Butt of Lewis in the north to Vatersay in the south.