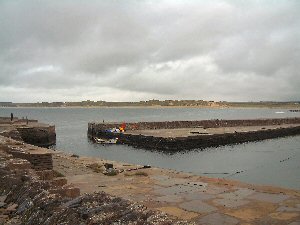 The harbour was built in the 1820s by James Bremner of Keiss for James Traill of Rattar, Sheriff-Depute, and subsequently Sheriff, of Caithness. After Traill had purchased Castlehill House he built roads and established the flagstone industry at Castlehill quarry. The harbour was built to ship the flagstone, the first shipment being in April 1825. It was reputed to be built by very few men; slabs were quarried at low tide, tied to large timbers with chains, floated into the basin and then positioned using shearlegs. Bremner's theory was that slabs placed upright had greater resistance to wave action. Boom gates at the entrance were used to enable excavation of the pumped out harbour basin and to control the run of water into the harbour when vessels were loading and unloading.

The Schooners which shipped out flagstone returned with coal, oilcake and other feed stuff. All commerce was controlled by Traill; workers were forced to buy from the Laird's store.

The harbour is now administered by a private trust.