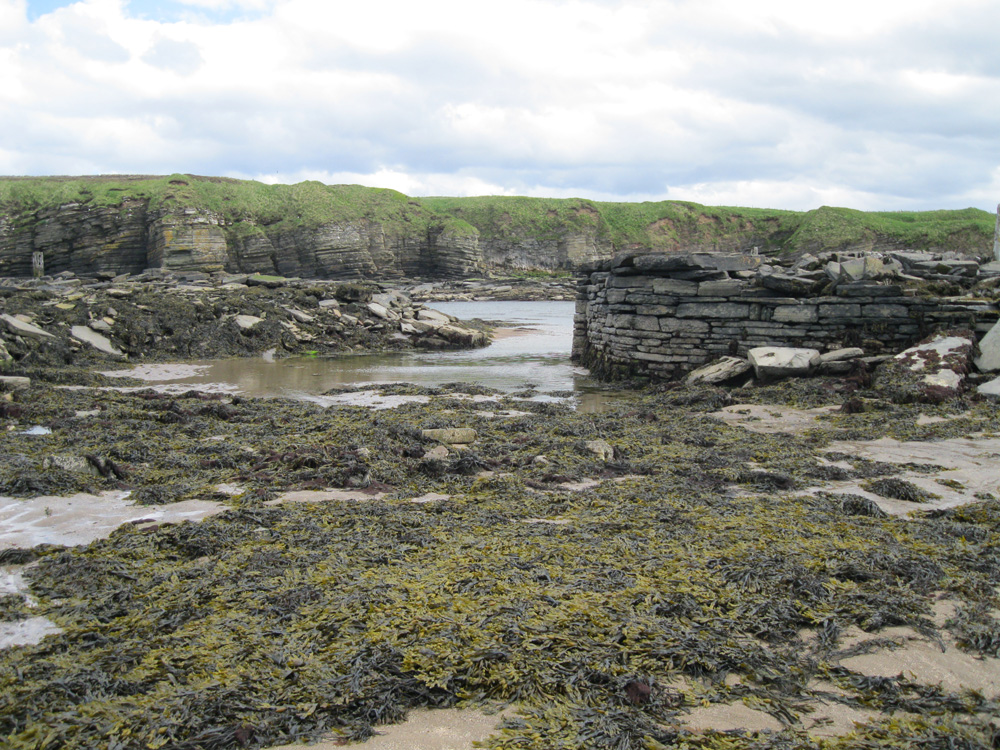 The persistent action of the sea is inevitably taking its toll of Ham harbour, which has not been used or maintained for many years.

The inlet was first mentioned by MacFarlane, c1725, as a place used by small trading vessels. Molls map of the same date carried a note "Ham Ferry to Snelsetter (probably Melsetter) in Hoy Island". In 1700 Captain James Moodie of Melsetter owned the public ferry between Brims on Hoy and Rattar in Caithness. It seems that the boat would land at Ham or Scarfskerry whichever was most convenient. In 1818 William Daniell made the trip from Scarfskerry to Melsetter taking three hours for the crossing and paying 15/- for the hire of the boat and crew. To assist seamen, Alexander Bryce re-mapped the coastline of northern Scotland in 1744 and Ham is one of the many havens named. By 1791 the first improvements to the natural inlet were described in the Old Statistical Account for Dunnet which records:-

"It (Ham) might also be rendered safe for small vessels, at little expense. There is a superficial pier erected there already; and the ground within it being pretty well cleared of stones, vessels of or below 100 tons, find no inconveniency of loading or unloading a cargo, or even lying there for weeks in the summer season. It has, however, the inconveniency of a bar, or ridge of sand and gravel, across the entrance of it, upon which there is not sufficient depth of water for vessels in any great burden, but with spring tides".

The superficial pier was probably built by Rattar estate to export grain from their storage girnal which dominates the head of the inlet. This building was later converted into a corn mill and is now used to garage farm machinery.

James Traill, of Castlehill, acquired Rattar from his sister-in-law and by good management turned a debt ridden estate into a going concern. He was also involved with the improvement of his other estate at Castlehill. By 1824 he had explored the possibility of exporting flagstone to the growing cities in the south and as a result opened up Castlehill quarry on an industrial scale. Initially the flagstone was shipped from the estate harbour at Castlehill but this proved inadequate for the growing output of flagstone and about 1830 he had a another harbour built at Ham.

James Bremner designed and supervised the building of both harbours. John Mowat in his excellent booklet on Bremner (p10) say that He also built the harbours of Castlehill, Ham and Sandside in Caithness, using the same method of securing the entrance with boom gates to allow excavations. The vertical slots for the dam boards are very evident at Sandside and Castlehill where the boards continued to be used during the working life of the harbours. They enabled ships, which had been loaded after settling on the bottom at low tide, to be gently refloated even in rough weather.

The harbour at Ham is now quite ruined but the lower section of both sides of the entrance are intact and do not have vertical slots. Dam-boards may have been used at Ham during construction, but unlike Castlehill and Reay, they did not feature in its day to day operation. It is noticeable that the entrance at Ham is less exposed and any large waves entering the inlet are more likely to spend their energy on the beach without entering the harbour basin. The ruined harbour is an interesting place to visit as many of the details of its construction have been revealed in the sections of wall which still stand.

Towards the cliff can be found traces of the original quarry which provided many of the huge stones.