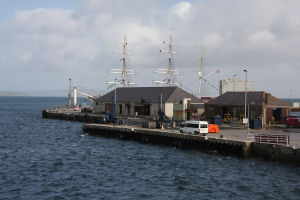 The story of Kirkwall has largely been the story of the development of its harbour. In 1811 work began on a series of harbour improvements at the north end of the town, on the site of today's harbour. These improvements have continued over the years, and the late 1990s saw a significant extension to the main pier. 2003 saw the trend continue with the completion of deeper water port facilities a little around the bay at Hatston. Only some of the 70 cruise ships that call into Kirkwall each year could previously berth at the quayside. Others had to anchor in the bay and transfer passengers to dry land on tenders. The pier at Hatston means this far fewer now need to do so.

Kirkwall is also the terminal for many of the ferries to Orkney's north isles. The ferry to Shapinsay departs from a slipway on the west side of the lifeboat pier. Ferries to Westray, Stronsay, Sanday and Eday depart from the linkspan on the main pier.