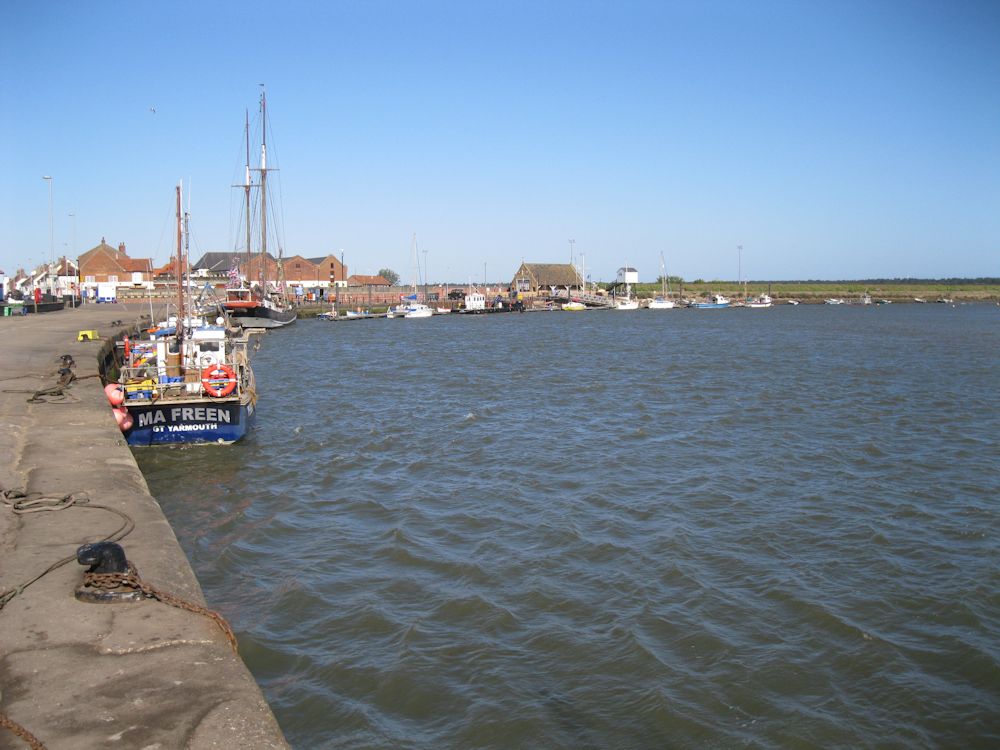 Wells-next-the-Sea on the North Norfolk coast has been a port and a largely natural safe-haven for ships and boats for at least 600 years. Protected by rare salt marshes behind a sand bar, Wells was one of England's major ports in Tudor times and a thriving, busy centre for shipping and maritime industry in the nineteenth and early twentieth centuries, when its stone quay was constructed, along with many of the large buildings and tiny yards and houses that still dominate the look and feel of the town.

Commercial shipping in Wells suffered with the coming of the railway in 1857 but the harbour continued to be busy up to the first world war. There was something of a revival in the 1970s and 80s with ships of up to 300 tons regularly unloading on the quay, arguably ending only in the late 1990s with cargoes of grain brought from Europe by the Dutch sailing ketch Albatros, said at the time to be the last commercial trading vessel under sail in Europe. However, Wells retains a small fishing fleet, with hard-working boats slipping out early on one tide and returning as soon as is practical on the next.

Wells Harbour now caters for a growing leisure trade, both for locally-owned boats and, increasingly, as a popular destination for visiting vessels. The historic Albatros is often in residence and is available for functions, charter, day trips and longer cruises. Another regular is the beautiful sailing barge Juno, built as a labour of love on a grand-scale by local boat builder Charlie Ward and now sailing day and half-day cruises. They have recently been joined by ex-Barmouth Liverpool-class lifeboat Chieftain and the fast RIB Titan offering local trips. The harbour is also used for sailing, wind-surfing, water ski-ing and just pottering about on anything from canoes and kayaks to speed boats, blue-water yachts and large motor cruisers (jetski-type craft and hovercraft are not permitted).

Situated in an area of outstanding natural beauty, Wells also plays host to thousands of holiday-makers and visitors, making for a unique mix of people and activities. The long tradition of gillying (fishing for shore crabs) from the quayside is as popular as ever and Wells' expansive beach with its oft-illustrated colourful beach-huts means that there are always people on, in or near the water. It may not be the noisy maelstrom of 100 or 150 years ago but the quayside remains a busy, active place where it's fun to get involved or just to sit and watch all that's going on.