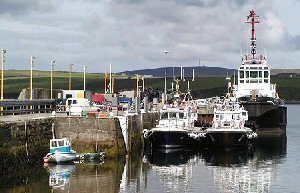 In 1880 Scapa Pier (2 miles from Kirkwall on the Southern side) was opened and became the main terminal for Orkney. In more recent years Kirkwall has become the more important port.

The first phase of a £1.15 million project to improve Scapa Pier began in March 2004. The contract for the primary work, which includes widening the pier and refacing the sea-wall, has been awarded to contractors Balfour Beatty.

The contract for the second part of the project - which involves dredging work - will be awarded in due course.

Within Scapa Flow plans are well advanced for the development of the Orkney Container Transhipment Terminal.

(Much of the following is taken from Charles Taits The Orkney Guide Book, soon to be released in its third edition).

Although long used as a transport route and a fishery and mentioned many times in the Viking Sagas it was not until the 16th century that Alexander Lindsay, pilot for James V of Scotland, did a survey of Orkney waters, including Scapa Flow. The name itself derives from the Old Norse Skalpeidfloi  bay of the long valley isthmus.

In 1812 Scapa Flow was suggested as a temporary rendezvous of the Royal Navy. In the same year the United States had declared war against Britain and this caused the first recent coastal defences to be built around Scapa Flow. Hackness Martello Tower and Battery, along with another tower on the north side at Crockness, were built between 1813 and 1815 to guard Longhope against attack by privateers supporting the United States during the Napoleonic wars. Due to the action of French Privateers in the English Channel many ships were taking the westabout route through the Pentland Firth. Ships collected at Longhope until a warship escort arrived and were vulnerable to attack during this time. The 33ft high towers contain living accommodation for the gun crew, a magazine below and a revolving gun carriage on top. The 24-pounder gun thus had a 360 degree arc of fire and a very good view of any approaching ships. The battery nearby had 8 24-pounder guns covering Switha and Cantick Sounds and was protected by an embankment and stone parapet. In 1866 the guns were replaced with 68-pounders firing through embrasures.

In 1905 the Admiralty became more interested in using Scapa Flow as a base for the Home Fleet. Before World War I the Navy held exercises in most years, often involving up to 100 ships. Just before the start of the war the Grand Fleet put to sea and dispersed to Scapa. Nothing yet had been done to render the harbour secure against attack and the fleet was continually under threat of U-boats or even a daring destroyer attack. Gradually defences were improved with 21 block-ships sunk at the eastern approaches, anti-submarine nets suspended between long lines of herring drifters, boom defences and various guns mounted on coastal positions.

The Northern Patrol covered the sea area between Iceland, Scotland and Norway, and intercepted 15,000 ships during World War I. This effective blockade was carried out by the 10th Cruiser squadron, most of which were armed merchant ships.

There were also tragic allied losses during World War I in the Scapa Flow area. In June 1916 Lord Kitchener, the Minister of War, arrived in Scapa Flow on his way to Russia to confer with the Czars government. He left on board the 11,000 ton HMS Hampshire on 5th June and took the unusual westerly route due to the unseasonably bad weather. This weather had also prevented mine-sweeping in the area and it was a mine that caused the ship to sink with the loss of all but 12 of her company. In Scapa Flow itself an internal explosion caused HMS Vanguard to blow up with the loss of all but two of her crew, over 1,000 men, on 9th July 1917.

Twenty two years later at the start of World War II, the battleship HMS Royal Oak was sunk at her moorings by a torpedo from a U-boat. The sinking resulted in the loss of 833 men and boys out of a total of about 1200. The means of sinking drew attention to the inadequacy of the protection around Scapa Flow. Many of the blockships sunk in World War I had been shifted by the tide or had disintegrated. More blockships had been procured and there were plans for further coastal defences but these had not yet been put in place.

The possibility of permanently blocking the eastern entrance to Scapa Flow was considered even before World War I but it wasnt until six months after the sinking of the Royal Oak that a plan was finally approved. In the meantime a further 13 blockships had been sunk. The Civil contractors Balfour Beatty were given the task of creating the four Churchill Barriers. This eventually employed 1700 men, including some Italian Prisoners of War, cable ways that had been used to build a bridge over the river Tigris in Iraq and power stations, railways and quarries. A total of nearly 1 million cubic metres of rock were used in their construction and they were clad with 36,500 five-tonne blocks and 15,000 ten-tonne blocks. Although not officially opened until May 1945 at the wars end, as early as 1942 the rock filled wire baskets were breaking the water surface and preventing any further entry of submarines in an effective, definitive way.

Scapa Flow continues to attract the world's navies, with NATO exercises and one-off visits still occurring. However, it has been the development of the oil terminal on Flotta, started in 1974 and operational two years later, which has brought some of the biggest ships afloat, huge oil carriers, into the great natural harbour. For similar reasons it is the available depth and shelter which has seen proposals for a container transhipment hub in Scapa Flow, able to accommodate ships not yet built but too deep and/or too wide for many of the world's existing ports.