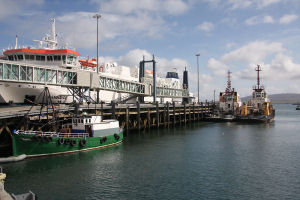 The first impression of Stromness is that of an old traditional stone built port, nestling comfortably against the hillside of Brinkie's Brae. Not as old as Kirkwall, Stromness flourished in the 17th and 18th centuries as a result of increased trade with the New World.

The wars between England and France also meant that shipping in the English Channel was dangerous, so the vessels made their way across the north of Scotland and used Stromness as a stop-off point. The ships of the Hudson's Bay Company and the whaling fleets became regular visitors with the town an important recruiting centre for crewmen.

The main harbour and its quays are now found towards the northern end of the centre of the town, and benefit from access via a new road along the shore that keeps traffic out of the north end of Stromness. This is a busy and interesting place, as well as one that gives the best views of Stromness itself. The harbour is also the terminal for the passenger-only ferry that connects Stromness with Graemsay and Moaness on the north end of Hoy.

A little north from the harbour is the terminal for the main ferry linking Orkney with Scotland, to Scrabster, near Thurso. Since late 2002 this has been operated by NorthLink Ferries from a rebuilt terminal.