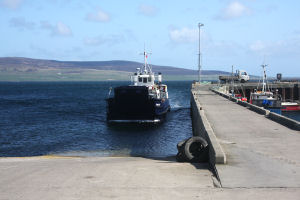 Tingwall is a tiny settlement on the north east coast of Orkney's West Mainland which looks across the Gairsay Sound to the islands of Gairsay, Wyre and Rousay.

These days Tingwall is best known as the Mainland terminal for the roll-on roll-off ferry to the islands of Rousay, Egilsay and Wyre. It's easy to believe that things have always been the way they are now, so it comes as a surprise to find that until 1987 the islands were served by a pair of ships (which also served all the other northern islands) operating from Kirkwall. Tingwall barely featured on the map.

For anyone who enjoys wandering around active fishing harbours, a visit to Tingwall is an unexpected and fascinating experience. Amongst the specialities are the incredibly fresh crabs which can be found, still snapping, in the blue tubs on the harbourside, awaiting collection by the Orkney Fishermen's Society truck.

But the piles of fish boxes and large numbers of lobster pots ready for use on the pier show that a range of catches are still to be had in the surrounding waters. And the rod and line fishermen casting from the far end of the harbour wall suggest that in some cases you don't need to go all that far to find the fish.

As a settlement, Tingwall comprises little more than a farmstead and a couple of houses overlooking the pier. Most visitors will barely glimpse it as they drive the mile to or from the A966.