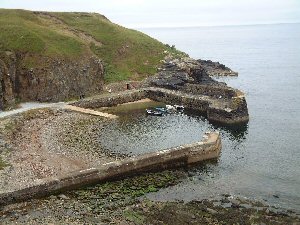 The harbour was built about 1840 and a simple lighthouse was constructed on the southern headland. This building was hexagonal, although according to a photograph taken in 1925 it became a rectangular two-storey building, also know as Latheronwheel Castle, where a lantern was placed in the upper floor as a simple guiding light.

In the 1890s each incoming tenant was allocated a two-acre plot with the right to fish from the harbour, which at this time had a fleet of over 50 vessels. Salmon was the catch prior to the herring industry boom. There were so many herring that men came from the Isle of Lewis in the herring season and lived with the owners of the boats. The herring were taken by cart to Helmsdale station.