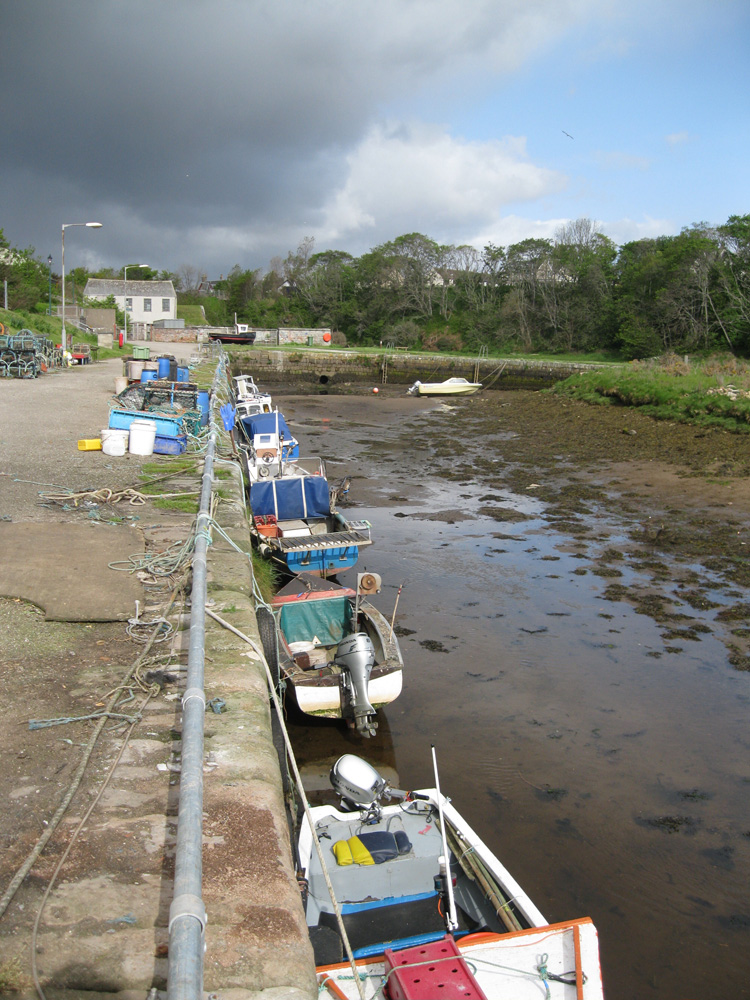 "There is a tolerable harbour for boats and small ships at the mouth of the River Brora." So reads the Statistical Account for the Parish of Clyne circa 1793. In fact boats were often beached at the so-called 'winter port' to the west of the river mouth. In the eighteenth century the salt pans in this area were connected to the river mouth by a railway (probably wooden), more or less along the line of what is still called Salt Street. An iron railway linking the Inverbrora mineshaft with the harbour was constructed in about 1790, followed by a another track from the replacement shaft at Fascally in 1810.

Modernisation of the harbour began in the early nineteenth century, with the construction of piers, warehouses, curing yards and an ice house. It was only now, around 1815, that the village of Brora as we know it began to grow. The fishing settlement of Lower Brora was gradually absorbed as development expanded from the new main road.

The harbour now provided an outlet for the expanding range of local goods, which included bricks, quarry stone and whisky from the newly opened Clynelish Distillery, and was even the embarkation point for some local emigrants to the colonies during the infamous Clearances.

The salt extraction industry peaked at the height of the herring fishery. In 1818, no less than 11,580 bushels (around 400 tons) of salt were shipped from Brora, satisfying most of the fish-curing requirements of the larger Moray Firth ports.

Tragedy struck in January 1821,when seven Brora fishermen were lost in a storm, leaving 23 dependants. Three more boats foundered on 23 November 1886,28 December 1896 and 3 March 1899 resulting in the loss often more lives. The second of these incidents occurred in mysterious circumstances. Ten boats set out for the Golspie fishing grounds on a calm, frosty morning. What appears to have been a tidal wave capsized the two leading boats. Seven men were pulled from the icy water but three others, William MacRae, Donald MacDonald and Duncan Sutherland, drowned or were overcome by the cold.

Exports declined in the face of competition from the south in the mid-nineteenth century, when the mine and the brickworks were closed. Even when these were re-opened by the Duke of Sutherland in 1872, the newly opened railway provided an easier and more economic outlet. Sailing ships of up to about 100 tons, including the 'Sutherland Lass', continued to berth at Brora until around 1930, bringing timber and 'good' coal from Fife and north-east England and returning with local produce, including barley and potatoes.

Without the support of the local community, the prospect of Brora harbour attracting sufficient funding for improvements from official Agencies at this time of increasing financial constraint would be very poor. Yet in its harbour Brora boasts a unique heritage as well as a potentially attractive focal point for residents and visitors alike.

The Brora Harbour Users Association was formed in 1996 with a broad-based membership of fishing, boating, residential and community interests to try to arrest the decline of the harbour. The Association acts both as a pressure group, lobbying the Highland Council and other Agencies for greater investment in the harbour, and as a fund-raiser (partly through its highly popular Harbour Fun Day).

Since the Harbour Association was formed, the appearance of the area has been greatly improved by the removal of rubbish, more regular cutting of the grassy surrounds and daffodil planting. Lifebelts and mooring rings have been installed and safety ladders have been recessed into the pier. Redundant fuel tanks have been removed.

Part of the river mouth was dredged in 1997 and a groyne enlarged to prevent spoil drifting back into the harbour entrance. Other work in hand includes re-surfacing of the slipway, the installation of a channel marker and lights to aid safer access, and the siting of three new seats. Further dredging will be carried out as funds permit, with priority now being given to the heavily silted harbour basin.

A list of priorities was drawn up in 1999 for early implementation. These include the installation of new navigational aids, dredging from the harbour basin to the outer channel, enlargement of the groyne on the west bank, deepening the channel through the outer bar, adding a sluice in the harbour wall to allow 'natural' cleansing and, finally, extending the slipway.