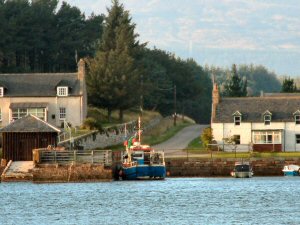 In the 18th and 19th centuries Littleferry provided an important sea link between the port of Burghead in Moray and the Sutherland estates in the days before the railways. In the latter part of the 19th century several of the buildings associated with the Littleferry community that had developed to support the transport and fishing trades fell into disrepair. Many of the buildings changed function, with some becoming private houses whilst others, such as the wood ferry ticket office became more or less derelict.

A former ferry to the south side of Loch Fleet was abandoned and the remains of a former jetty can still be seen, opposite Littleferry.

The stone pier is still used occasionally by small craft.