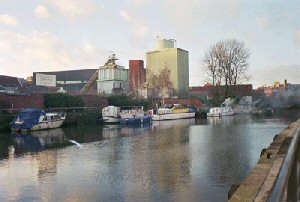 The River Wensum allowed access to King Sweyn, a Viking who invaded Norwich in 1004 with his fleet. He burned Norwich and then marched to Thetford which was also destroyed. Only a century later the river was the route for the stone used to build Norwich Cathedral, coming from France up the Yare and Wensum, through the Cathedral water gate (Pulls Ferry) and along a canal made specifically for the transport of the building materials to be unloaded on the spot.

The Ribs of Beef, a 14th Century building, now a pub, has seen Norwich grow as a port, witnessed medieval traders unloading onto quayside and was the haunt of Wherry skippers who sailed the Norfolk Broads.

In the Middle Ages Norwich's most important industry was cloth manufacture and the city's situation as an inland port bolstered its trade. The Rivers Wensum and Yare connected Norwich to London and its overseas markets through Great Yarmouth and the North Sea. The trading vessels could only travel with the help of wind or tide or both; the journey from Norwich to the port of Yarmouth might take three days or more and when the wind did not serve the boats tied up at one of the riverside houses.

The New Cut was built as a canal to link the Yare via the Waveney, thus allowing shipping access to the Port of Norwich without having to pass through the Port of Great Yarmouth. In the days when Norwich was an important river port this was a busy commercial highway but now only holidaying pleasure craft use it.

On May 28th 1827, a bill of parliament was passed making Norwich a port. The bill became effective from 3rd July but met with hostility from authorities in Yarmouth.

On 2nd October 1983 a flotilla of rivercraft sailed from Oulton Broad via Haddiscoe New Cut to Foundry Bridge to celebrate the 150th Anniversary of Norwich as a port.

The River Wensum was an important transport artery until the coming of the railway. The gentle Wensum, curving from north to east and south, helped Norwich to become a major port in the past and now brings pleasure craft into the citys heart. Preserved wherries can still sometimes be seen sailing into the heart of Norwich, and the two boom towers just below Carrow Bridge stand in ruined testimony to the toll once extracted from vessels entering the Port of Norwich. Nearby are the Maltings, which are now homes and business units, once served by the river, now under threat from proposals to redevelop part of the football ground.

The river continues to carry some cargo even today. Fuel for Cantley sugar beet factory is delivered by the coaster Blackheath and until the late 1980s grain was delivered to Read Woodrows mill in Norwich. However today the river is largely the preserve of the holiday maker and the sailor.