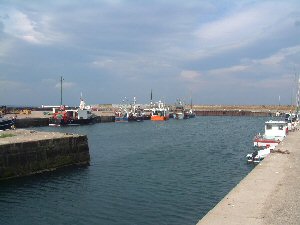 The quiet fishing village of Burghead was built in 1805-09 on a peninsula on the Moray Firth. It was built over 'The biggest Iron Age fort in Britain' constructed by the Picts in the 4th-7th century AD.

The Old Warehouse used to be used for storing grain, and there was an area for gutting fish. Today the harbour is peaceful with perhaps no more than a dozen fishing boats. However it is still a working harbour with the occasional large ship calling in to collect stone, wood or grain, and in the summer months a yacht or other small craft will call in to sample the delights of this small corner of Scotland.