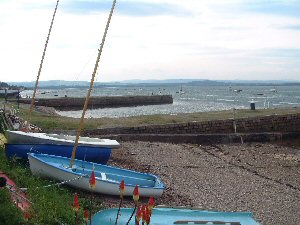 Storms in the 1600s led to the original village being buried by sand dunes; and the replacement village was lost to floods in 1701. What you see today is Findhorn's third incarnation.

The village's growth owes much to Findhorn Bay. This is a narrow-mouthed inlet that stretches some two miles south from the sea and opens out to a maximum width of around two miles once inland of the dunes and immediate coastal zone. Much of the southern part of it is exposed as mud flats at low tide, and the area is a haven for birds, and for ornithologists.

Findhorn was for a time an important commercial and fishing port with a thriving shipbuilding industry, complete with trading links with Baltic and Scandinavian ports. Today much of the village's life still revolves around the bay, though now as one of the major sailing and watersports centres along this stretch of coast. It is also home to the Royal Findhorn Yacht Club.