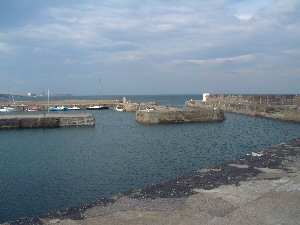 The village, or small town, of Hopeman, lies on a gentle ridge sloping down to the sea. It was founded as a fishing community only in 1805, and was much enlarged and the harbour improved by Admiral Duff of Drummuir who bought the lands in 1837. It has a rather bare aspect, lacking trees in a countryside so rich in timber, but compact, its streets laid out at right angles. Quite large, with a population of over 1,000, it lays itself out to attract holiday-makers. But its two dozen seine-net-fishing-boats still constitute its basic industry - although 120 boats once fished from here. Its harbour is also much used by pleasure-craft, but unfortunately suffers from sand-silting. There is an old ice-house, with the usual vaulted roof, for the storing of fish.