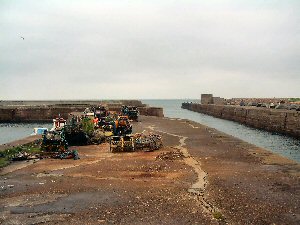 Since the foundation of the village in 1797 by Alexander, 4th Duke of Gordon, there seems never to have been a definitive way of spelling its name. Many of the early sources use Portgordon, others Port Gordon. At one stage the western-most coastal village in Banffshire, Portgordon is now in Moray.

In 1928 there had been around forty boats, many of which still used the harbour for commercial purpose, but by the end of the War that figure had declined to fourteen and of these few were engaged in any serious activities. It came as no surprise, therefore, when the Crown Estates Commissioners announced, in the one-hundred and fiftieth anniversary year, that they had no option but to close the harbour. Thereafter the centre of so much of the village's activities throughout the years would be left in a state of neglect and would be occupied by only a few pleasure crafts. However lamented the closure of the harbour might have been, the Crown Estates had little option. Nevertheless, it was an inglorious end to the harbour, especially for those who could remember the heyday of commercial life in Port Gordon. Worse, however, was the fact that as the years and the weather took their toll, the harbour became a source of ignominy which incensed many in the village.

Further damage took place during the Great Gale of 31 January 1953 and the structure steadily deteriorated. By the end of the 1970s the harbour was in a sorry state of disrepair. The north-west corner had a huge breach in it which was gradually becoming worse and the mouth of the harbour had all but silted up. Not only was it an eyesore but those who lived near the harbour feared that its role as part of the coastal defences was being undermined.

This decline was halted when the 69th Gurkha Independent Field Squadron was commissioned to rebuild the harbour, between 1985 and 1989, thus turning around decades of neglect. This was funded by various grants after the refusal of Grampian Regional Council to take over responsibility for the harbour.

There is an active body, Portgordon Community Harbour Group, that has formed for the purpose of regenerating the harbour, taking it from its present neglected state into a marina that will benefit the local area. More details are on the group's website.