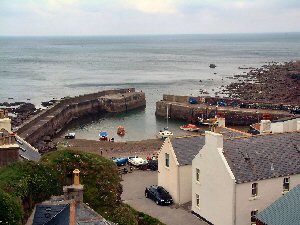 At the east end of Pennan lies its harbour. These days it is still used by a couple of fishing vessels, but otherwise its life revolves around leisure craft. Today's harbour is the latest in a succession over the years. The first harbour was built here in 1704, but it had fallen into disuse by the end of the century and a replacement was built in 1799.