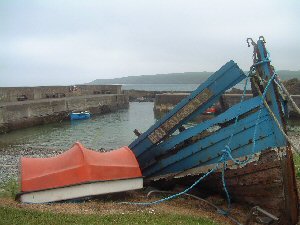 Sandend lies on the coast some three miles west of Portsoy. As its name suggests, it stands at the end of a beautiful broad sandy bay which is one of the most popular beaches in the area.

The earliest mention of Sandend dates back to 1624, but most of the charming fisher houses still standing today were built in the early 19th century when the tiny harbour, one of the smallest in Scotland, housed a thriving fishing industry. Today local fishermen sail from nearby Buckie although fish is still cleaned and cured in the village.

The present harbour was built at the end of the 19th century, paid for with money from the local fishermen. At one time at least 16 boats worked out of Sandend, in the summer going to Stronsay and Lerwick and in the winter staying in the Moray Firth. In 2009 the harbour was taken over by the Sandend Harbour Trust Company Ltd, as a charity. The company was then successful in obtaining a sizeable grant from the Rural Aberdeenshire LEADER Programme, enabling stabilising works to be undertaken on the harbour.